more cruel. Some of the religious figures in the community, however, act kindly to slaves. One man named Mr. Wilson even runs a slave school until the community shuts it down. Auld, on the other hand, only uses his newfound piety to justify his cruelty to his slaves with added fervor.While Douglass lives under Auld, he sometimes purposely lets Auld’s horse run away to a nearby farm. Douglass then goes to fetch the horse and eats a full meal at the neighboring farm. After this happens several times, Auld decides to rent Douglass to Edward Covey for one year. Covey is a poor man with a reputation for successfully taming problem slaves. Slave owners give Covey their slaves for one year, during which he “breaks” the slaves while using them as free labor on his land. Douglass knows of Covey’s sinister reputation, but looks forward to being fed sufficiently at Covey’s.Summary: Chapter XFrom the beginning of Chapter X through Douglass’s fight with CoveyDouglass arrives at Covey’s farm on January 1, 1833, and he is forced to work in the fields for the first time. His first task is to guide a team of unbroken oxen. The oxen are uncooperative, and Douglass barely escapes with his life. Finding that Douglass has failed, Covey orders him to take off his clothes and receive punishment. When Douglass does not respond, Covey rushes at him, tears his clothing off, and whips him repeatedly. Covey continues to whip Douglass almost weekly, usually as punishment for Douglass’s supposed “awkwardness.”Covey’s slaves must work in the fields during all the daylight hours, with few breaks for meals. Unlike most slave owners, Covey often works in the fields with his slaves. He also has a habit of sneaking up on the slaves by crawling through the cornfield in an attempt to catch them resting. Because of this behavior, the slaves call him “the snake.”Covey behaves deceitfully even in regard to his religion. His excessive piety seems designed to convince himself that he is a faithful man, even though he is guilty of blatant sins such as adultery. Covey owns one slave named Caroline whom he bought to be a “breeder.” Covey has hired a married man to sleep with Caroline every night so that she will produce more slaves for Covey to own.Douglass recalls that he spent his hardest times as a slave during his first six months rented to Covey. Douglass becomes deadened by work, exhaustion, and Covey’s repeated punishments. Douglass loses his spirit, his intellect, his desire to learn, and his natural cheerfulness. Sunday is the slaves’ only leisure time, and Douglass usually spends the day in a stupor in the shade. He considers killing himself, or even Covey, but he is paralyzed by both hope and fear. 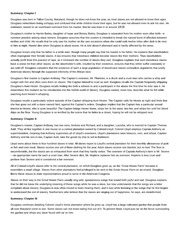 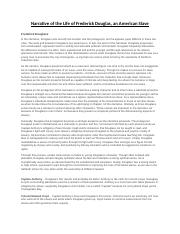 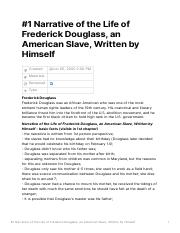 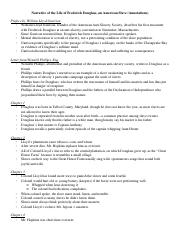 Narrative of the Life of Frederick Douglass, an American Slave (Annotations) copy 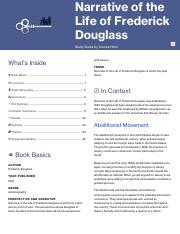 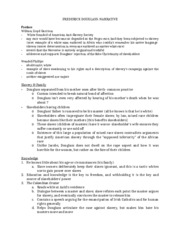