University of Texas, Arlington
NURS
NURS 5315
The lack of insulin causes the following A hyperglycemia usually 200 At this

The lack of insulin causes the following a

of insulin causes the following: •A hyperglycemia, usually ~200. At this value glucose cannot be reabsorbed by the kidneys and spills into the urine, causing glycosuria. This increases urine osmolality. Because water moves from an area of low concentration to high
2 concentration, the high urine osmolality pulls water into the urine. The increased water loss causes polydipsia, polyuria, and if it goes on long enough s/s dehydration. •Because they are unable to use glucose as energy, gluconeogenesis is initiated. Ketone bodies are the by-product of this metabolism and this results in ketonuria, acetone breath, weight loss, nutritional deficiency, polyphagia (increased hunger), and fatigue If this is not treated it will progress to DKA. The clinical manifestations of Type II diabetes initially begin with mild polydipsia, polyphagia, and polyuria. Usually there are no signs of metabolic acidosis. Because there is some insulin production and secretion (unlike in type I), there is minimal need for gluconeogenesis; therefore, there is usually no DKA. Since S&S are so insidious, glucose can slowly go much higher than in Type I (BS > 400-900) Acute Complications of Diabetes Mellitus include hypoglycemia, diabetic ketoacidosis, and hyperosmolar hyperglycemic state. Hypoglycemia is a low blood glucose level. It is often caused by insulin therapy but may be caused by not eating as well. Symptoms include pallor, tremor, anxiety, tachycardia, palpitations, diaphoresis, headache, dizziness, irritability, fatigue, poor judgment, confusion, seizures and coma. Symptoms are due to the release of epinephrine and cortisol during the hypoglycemic episode. Hence, beta blockers can block many of the symptoms of hypoglycemia. Diabetic Ketoacidosis (DKA) is a life-threatening, acute complication which results from insulin deficiency and the release of counter regulatory hormones (catecholamines, glucagon, cortisol). This is more commonly seen in Type 1 DM but it may occur in Type 2 also. The lack of insulin causes an increase in hepatic glucose production, a decrease in peripheral glucose utilization, the initiation of gluconeogenesis and the formation of ketone bodies and metabolic acidosis. It may progress to a comatose state. The diagnostic criteria includes: •Glucose > 250mg/dl •Serum bicarb of < 18g/dl •Serum pH of < 7.30 •Elevated anion gap •Presence of urine or serum ketones •Fluid volume deficit •Electrolyte imbalance Persons with DKA require treatment with IV fluids, IV insulin and treatment of electrolyte imbalances. Since DKA is usually triggered by a precipitating event, a search for a cause is warranted so that it can be treated. Infection, ACS, and noncompliance with insulin are common causes. Hyperosmolar Hyperglycemic State (HHS) is an uncommon complication of Type II. It is more common in the elderly and is usually triggered by an infection, cardiovascular or renal disease. The pathogenesis for HHS is basically the same as DKA except for the production of ketone bodies. Poor glucose control leads to an elevated glucose. The elevated glucose causes a high serum osmotic pressure and an osmotic diuresis which leads to severe dehydration, low blood volume and poor perfusion. Diagnostic criteria includes: •Glucose > 600 typically
3 •Normal serum bicarb •Serum osmolality of >320 mOsm/L •Absent ketones 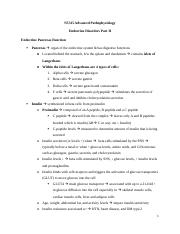 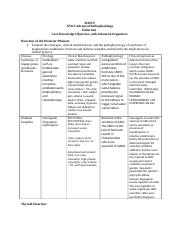 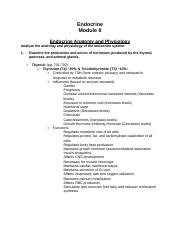 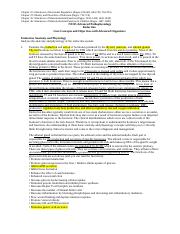 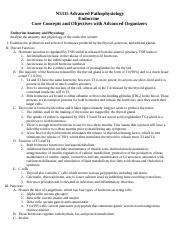 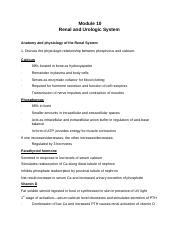