Bluestocking who her scientific partner believed had

bluestocking who, her scientific partner believed, 'had to go, or be put in her place'. Only recently has her reputation begun to be restored. Now Patricia Hewitt, the Trade and Industry Secretary, is to create a Franklin Medal in her honour to raise the profile of other women scientists, with a £30,000 annual prize for exceptional innovation. Franklin's sister, Jennifer Glyn, is delighted about the medal scheme. 'Rosalind would have been amazed and immensely pleased at this recognition of her work,' she said. There have only ever been 10 female Nobel science laureates. The women that science has forgotten include astronomer Caroline Herschel as the first woman to discover a comet. By the time she died in 1948, she had mapped thousands of galaxies. Overshadowed by her brother, the Astronomer Royal, she played down her achievements. Lise Meitner, described by Einstein as 'Germany's Marie Curie', proposed the theory of nuclear fission. Meitner, who was Jewish, fled Germany in 1938 and the Nobel Prize for chemistry went to her collaborator, Otto Hahn. Physicist Jocelyn Bell Burnell was a research student at Cambridge when she 'tripped over' the discovery of pulsars, tiny super-dense stars with strong magnetic fields. It led to a Nobel Prize in 1974, for her supervisor. Dorothy Hodgkin, barred from chemistry club meetings when she arrived at Oxford because of her sex, went on to become the only British woman to win the Nobel Prize, for discoveries on the chemical structures of penicillin and insulin. HILIARY ROSE, 2002 (Journalist for ‘The Guardian’, June 15) In 1975, a biography was published of a woman scientist who had died from cancer at 37. In the research community of crystallographers, Rosalind Franklin had been highly regarded for her ability to produce X-ray photographs with exquisite precision, but in the wider world she was unknown. Her friend Anne Sayre changed this, for her biography, ‘Rosalind Franklin and DNA’, demonstrated

24 to a huge readership that Franklin's work was crucial to establishing the structure of DNA. But still the scientific community was unmoved. Sayer’s immediate provocation was James Watson's hugely popular book, ‘The Double Helix’ (1968). It was not just that Watson systematically stereotyped Franklin, making her out to be a bluestocking and a frump, nor that he called her ‘Rosy’ when even to her intimates she was Rosalind, but that this stereotyping enabled him to erase Franklin's crucial contribution of the X-ray photographs that confirmed the helical structure. Written by Sayer with the support of many crystallographers outraged by Watson's unprofessional treatment of a colleague, and one silenced so cruelly by premature death, Sayre's biography spoke directly to the rising women's movement. Its subtitle, "A vivid view of what it is like to be a gifted woman in an especially male profession", made sure of that. 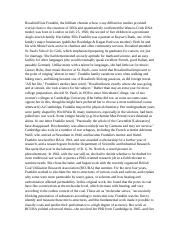 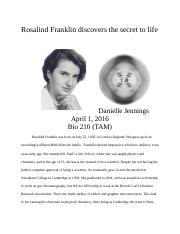 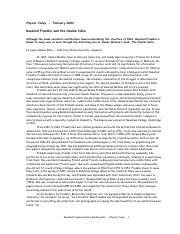 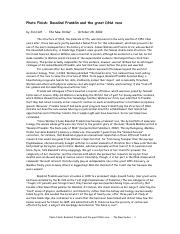