This was also investigated numerically before and the

2. This was also investigated numerically before, and the general conclusion was that roughness will always increase the contact angle if θ 0 > π/ 2, and decrease it if θ 0 < π/ 2 [8]. ( ∗ ) E-mail: [email protected] c EDP Sciences

166 EUROPHYSICS LETTERS Fig. 1 – A water droplet on a leaf of Cotinus coggygria L . The strong water-repellent properties do not change measurably upon drying the leaf, nor upon evacuating the atmosphere. However, it is shown in the present paper that it is well possible to construct a water- repellent surface from a material of any finite contact angle, i.e. , the microscopic contact angle, θ 0 , may be below π/ 2. This may be interesting not only as a possible explanation of the wetting properties of certain plant leaves, but also in view of possible applications in tailoring surfaces which repel not only water, but also oil and other non-polar liquids. Our study differs from the former at least inasmuch as it considers interface configurations which need not represent the thermodynamic equilibrium of the system. In fact, wetting or non- wetting of certain plant leaves can be considered non-ergodic insofar as the same leaf can be found to behave wet or non-wet, depending on experimental history. As an example, we show in fig. 1 a photograph of a water droplet on a leaf of Cotinus coggygria Scop . The contact angle is obviously quite close to π . Drying of the leaf does not change the wetting properties noticeably, suggesting that complex biophysical properties, which require a living organism, are not responsible for the high contact angle. In addition, we have tested whether the air entrained between the water droplet and the leaf plays a significant role [1] by putting the setup into a vacuum chamber. Down to a pressure well below 1 mbar, no change in the wetting properties, both statical and dynamical, could be seen. However, when the leaf was soaked in water at a depth of 20 cm for a few seconds and then removed from it, it appeared wet, and contact angles close to zero were observed. This latter observation suggests that the above-mentioned brush model cannot be appropriate for the leaf, since this would result in non-wetting in all cases, independently of experimental history. Similar observations were made with other leaves, such as Cercis siliquastrum L. or Ginkgo biloba L . Let us try to construct a substrate profile such that it becomes as water repellent as possible. To begin with, consider a single, cylindrically symmetric indentation in a substrate at which the liquid forms a finite contact angle, θ 0 , such as depicted in fig. 2. If the slopes of that indentation are steep enough, there will be a configuration in which a free liquid surface spans the indentation. For θ 0 < π/ 2, some overhang is needed, but this does not disturb the concept to be developed. More precisely, there will be a (circular) intersection, at an angle of θ 0 , of the substrate with a horizontal plane representing the liquid surface. If the cross-section

Most Popular Documents for CHE 408 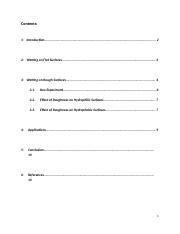 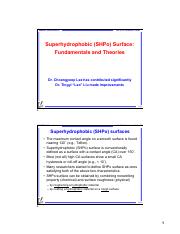 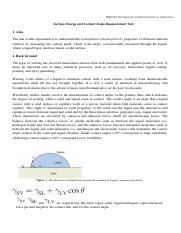 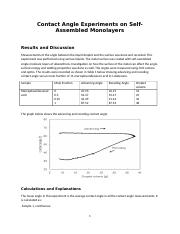 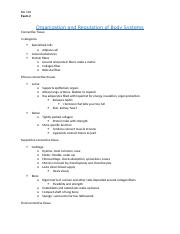 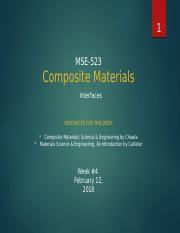