17 in short incarceration is partly sexual and the

17 In short, incarceration is (partly) sexual, and the sexuality of prison is mostly if not entirely coerced. Prisons shape the sexual activity that goes on within them, but prisoners’ efforts to use law to gain sexual safety inside the prison have, so far, been unsuccessful. 18 This legal failure is due to a conceptual dichotomy between legal punishment and penal practices, and a critique of that dichotomy is the second aim of this Article and the focus of Part II. The punishment/penal practices dichotomy underlies Eighth Amendment respondents may instead be situations of sexual exploitation,” but suggest that more detailed qualitative research would be required to assess this issue. Id. at 421. 16 See infra Part I. 17 See Erving Goffman, Characteristics of a Total Institution , in D EVIANT B EHAVIOR 464 (Delos Kelly ed., 1984). Federal courts have occasionally remarked on the near-total control of prisoners by their keepers. See, e.g. , O’Lone v. Estate of Shabazz, 482 U.S. 342, 354 (1987) (Brennan, J., dissenting) (noting that prisoners “are members of a ‘total institution’ that controls their daily existence in a way that few of us can imagine”) (citing E. G OFFMAN , A SYLUMS : E SSAYS ON THE S OCIAL S ITUATION OF M ENTAL P ATIENTS AND O THER I NMATES 1-125 (1961)). In Morales v. Schmidt , 340 F. Supp. 544 (W.D. Wis. 1972), the court remarked that prison is a complex of physical arrangements and of measures, all wholly governmental, all wholly performed by agents of government, which determine the total existence of certain human beings (except perhaps in the realm of the spirit, and inevitably there as well) from sundown to sundown, sleeping, waking, speaking, silent, working, playing, viewing, eating, voiding, reading, alone, with others. Id. at 550. 18 See infra Part II.

2006] Sexual Punishments 145 doctrine and leaves prison conditions largely outside the reach of the constitutional prohibition of “cruel and unusual punishments.” Punishments, in U.S. constitutional law, are the abstract deprivations of liberty articulated in statutes and in sentencing orders. The actual manifestations of those abstractions, or real prison conditions, are largely beyond the scope of “punishment” and of the law. The embrace by courts—and by many punishment theorists—of this abstract account of punishment represents an absurd denial of practice. As a theoretical sleight of hand, it obscures the fact that prisoners, like all humans, are embodied beings who live in and experience an empirical, physical world. As a matter of legal practice, it eviscerates the Eighth Amendment by replacing a positive account of punishment with a normative one. Part II addresses the failures of current Eighth Amendment doctrine, but it also notes the limits of doctrine: given that the sexualized character of imprisonment extends beyond violent rapes, even a reformed Eighth Amendment jurisprudence is unlikely to render the prison a non-sexual punishment. 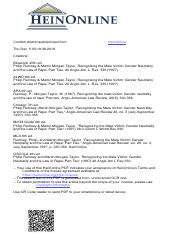 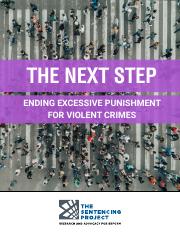 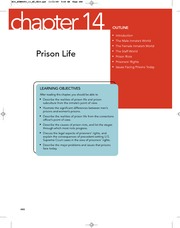 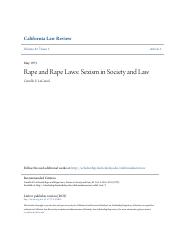 Rape and Rape Laws- Sexism in Society and Law 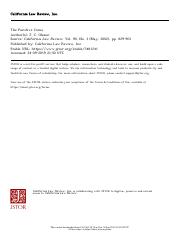 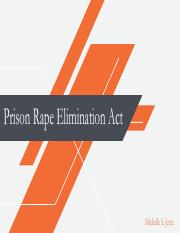