Mehreen Qureshi ENG4U May 28 th , 2019 that he has been shot. He looks at the green light, which represents Daisy and his hope, seeing it fade away as he closes his eyes and falls back into the pool, dead. We also know that it was Nick who has called, not Daisy, showing that it was false hope, but Gatsby died thinking he’s a winner when it came to winning Daisy back. This was used to describe a dramatic scene for our main character, and to intensify his death, making the audience feel every moment of pain, lost hope and anger from the unfortunate series of events that had occurred within minutes towards the end of the film. Although there are differences in the film, there is also quite a few similarities between the book and film. The importance of symbolism was crucial for both film and book as it made the audience understand the meaning behind each symbol. To begin, the Valley of Ashes is symbolic as the audience in both book and film understand that this is where the less fortunate live, like George Wilson and Myrtle Wilson live. This place is symbolic as it is known as the place for lost hope and depression, as we see that Myrtle and George are miserable living there, and finally decide on moving out of that part of town. There is something haunting about the Valley of Ashes, especially after Myrtle’s death, which relates back to how depressing the part of town really is. In the film and book, we can see how drained George Wilson is and that he wants more but can’t due to where he lives. Another example is Gatsby’s mansion. His parties and mansion are symbolic for how he threw all his money away to get Daisy’s attention by throwing big parties and living intentionally right across the bay from her, trying to impress her now, when he couldn’t when he was poor and off to war. After he got Daisy’s attention, the parties died down, and later on the mansion became more and more empty as their affair grew, because

Learn more about It and The Great Gatsby with Course Hero's FREE study guides and infographics! 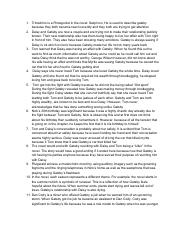 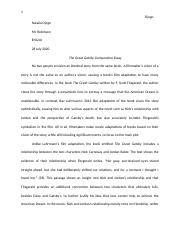 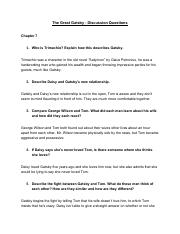 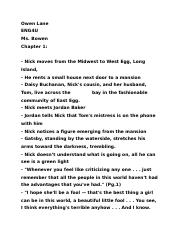 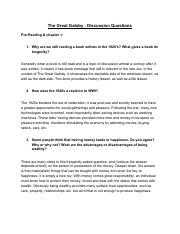 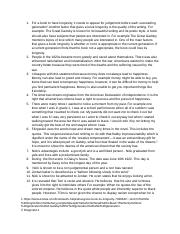