delicate features, effacing their ideal prettiness, but the more I looked at them both, at the one who was young and the one who was old, the greater the distressing resemblance became. "I saw Lucy growing older and older, striving against those accumulating years which bring wrinkles in the face, produce a double chin and crow's-feet, and spoil the mouth. THEY ALMOST LOOKED LIKE TWINS. "I suffered so, that I thought I should go mad. Yet in spite of myself, instead of shaking off this feeling and making my escape out of the theater, far away into the noise and life of the boulevards, I persisted in looking at the other, at the old one, in examining her, in judging her, in dissecting her with my eyes. I got excited over her flabby cheeks, over those ridiculous dimples, that were half filled up, over that treble chin, that dyed hair, those lusterless eyes, and that nose, which was a caricature of Lucy's beautiful, attractive little nose. "I had a prescience of the future. I loved her, and I should love her more and more every day, that little sorceress who had so despotically and so quickly conquered me. I should not allow any participation or any intrigue from the day she gave herself to me, and once intimately connected, who could tell whether, just as I was defending myself against it most, the legitimate termination--marriage--might not come? "Why not give one's name to a woman whom one loves, and whom one trusts? The reason was that I should be tied to a disfigured, ugly creature, with whom I should not venture to be seen in public. My friends would leer at her with laughter in their eyes, and with pity in their hearts for the man who was accompanying those remains. "And so, as soon as the curtain had fallen, without saying good

day or good evening, I had myself driven to the Moulin Rouge. * * * * * * * "Well," Florise d'Anglet exclaimed, "I shall never take mamma to the theater with me again, for the men are really going crazy!" A COUNTRY EXCURSION For five months they had been talking of going to lunch at some country restaurant in the neighborhood of Paris, on Madame Dufour's birthday, and as they were looking forward very impatiently to the outing, they had risen very early that morning. Monsieur Dufour had borrowed the milkman's tilted cart, and drove himself. It was a very neat, two wheeled conveyance, with a hood, and in it Madame Dufour, resplendent in a wonderful, sherry-colored silk dress, sat by the side of her husband. The old grandmother and the daughter were accommodated with two chairs, and a yellow-haired youth, of whom, however, nothing was to be seen except his head, lay at the bottom of the trap. When they got to the bridge of Neuilly, Monsieur Dufour said: "Here we are in the country at last!" At that warning, his wife grew sentimental about the beauties of nature. When they got to the crossroads at Courbevoie, they were seized with admiration for the tremendous view down there: on the right was the spire of Argenteuil church, above it rose the hills of Sannois and the

Learn more about Candide and The Tempest with Course Hero's FREE study guides and infographics! 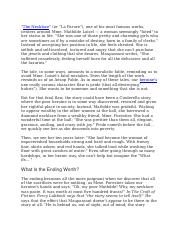 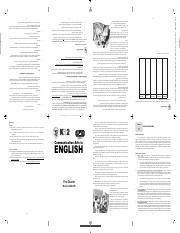 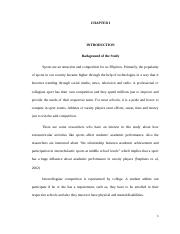 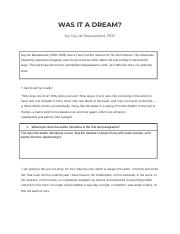