Exacerbation of copd and are only used for short

exacerbation of COPD and are only used for short periods of time (generally around five days) because long-term use of these can cause grave side effects such as diabetes, weight gain, increased risk of infection, cataracts, and osteoporosis, increased blood pressure, exacerbation of CHF, leukocytosis, and formation of peptic ulcers. They act to prevent worsening of the disease process (Mayo Clinic, 2017). Oral steroids such as corticosteroids are also commonly referred to as anti-inflammatory drugs. They decrease airway inflammation by inducing or inhibiting the production of end-effector proteins which leads to decreased swelling and mucus production enabling better breathing (Arcangelo, Peterson, Wilbur, & Reinhold, 2017). Since viral and bacterial respiratory infections commonly cause exacerbations of COPD, a five- to ten-day course of antibiotics are usually prescribed for patients who present with all three

basic symptoms of acute COPD exacerbation (increased amounts of sputum, increased dyspnea, pus-like sputum), or pus-like sputum and one of the other basic symptoms are present, or if a person requires mechanical ventilation (Arcangelo, Peterson, Wilbur, & Reinhold, 2017). Recent evidence-based studies confirm that macrolide antibiotics may reduce the rate of COPD exacerbation. Azithromycin (500mg PO three times/wk. or 250mg PO/day) or erythromycin (500mg PO BID) for one year in individuals prone to exacerbations reduced the risk of exacerbations compared to those of usual care; however, azithromycin was associated with an increased impaired hearing tests and bacterial resistance (GOLD, 2018). Methylxanthines bronchodilators such as theophylline and aminophylline enhance contractility of the diaphragm; cause relaxation of bronchial smooth muscles; and have a scant anti-inflammatory effect, but the exact mechanism of action is unknown (Arcangelo, Peterson, Wilbur, & Reinhold, 2017). Phosphodiesterase-4 (PDE4) inhibitors such as Roflumilast reduce “moderate and severe exacerbations treated with systemic corticosteroids in patients with chronic bronchitis, severe to very severe COPD, and a history of exacerbations”. Adverse reactions frequently caused by these inhibitors are decreased appetite, abdominal pain, nausea, weight loss, headache, diarrhea, and disturbances in sleep (GOLD, 2018). Roflumilast is contraindicated in known sensitivity to it or any of its components. Roflumilast is metabolize in the liver by P-450 isoenzyme, a hepatic cytochrome. Drug interactions occur when PDE4 inhibitors are given concurrently with strong CYP3A4 inducers such as phenobarbital, Dilantin, Tegretol, and rifampicin that impair the metabolism of Roflumilast and increase its serum concentration thereby increasing the risk of adverse reactions (Arcangelo, Peterson, Wilbur, & Reinhold, 2017). 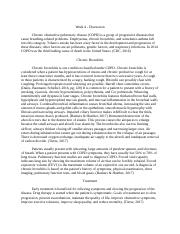 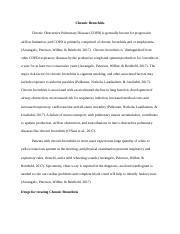 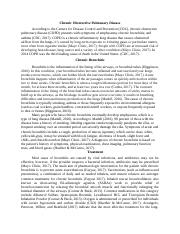 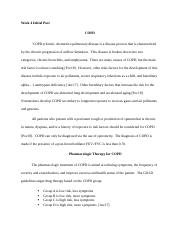 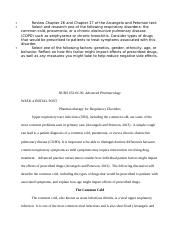 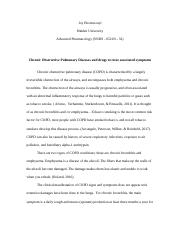