Havana High School
HISTORY
HISTORY 102, 201
The purpose of this paper is to examine the case of child soldiers in the

The purpose of this paper is to examine the case of

or at war, however, in situations of war the problem of child soldiers are aggravated. The purpose of this paper is to examine the case of child soldiers in the Democratic Republic of Congo (DRC) by examining the trend especially during the latter years from 2006- 2008, and how the world has responded. The situation in the DRC is worth researching due to the fact that since 1998, the civil war encompassing about 27 military groups and 7 countries, which has become known as the Africa world war or the Great War of Africa, has continued to violate and victimize children, yet little attention has been given. In the DRC, child recruitment increased so dramatically in early 2003 that observers described the fighting forces as armies of children. Children are used for front-line combat, often as cannon fodder, and forced ahead of older troops as human mine detectors. They are used as spies, messengers, guards, porters, cooks, and domestic servants. Many child soldiers are girls, who are expected to fight and are also often subjected to rape or sexual exploitation. The international body and governments have made efforts to rescue these children and reintegrate them into normal life, but DRC government forces and rebels loyal to General Laurent Nkunda are recruiting and using children trafficked from Rwanda and Uganda to fight. According to the United Nations, the movement of armed groups across borders to recruit children from refugee camps continues to be alarming, and Congo has one of the world’s largest numbers of child soldiers estimated to be about 30,000. ‘A child soldier is any person under 18 years of age who is part of any kind of regular or irregular armed force or armed group in any capacity, including but not limited to cooks, porters, messengers and anyone accompanying such groups, other than family members’. In his eighth report to the Security Council on children and armed conflict the Secretary-General recorded grievous violations against children in 20 situations namely: Afghanistan, Burundi, Central African Republic, Chad, Colombia, Côte d'Ivoire, Georgia, Haiti, Iraq, Lebanon, Myanmar, Nepal, occupied Palestinian/Israel Territory, the Philippines, Somalia, Sri Lanka, Sudan, Thailand, Uganda and the Democratic Republic of the Congo. He additionally reported 56 parties of both State and non-State actors which commit atrocities against children, and reiterated that regardless of the progress made to liberate children from parties concerned, more than 250,000 children continue to be exploited as child soldiers in many countries in conflicts i . The outbreak of war in the Congo in 1998 ‘officially’ ended in July 2003 when a transitional Government of national unity took office, a government composed of representatives of the former government, major armed groups, opposition political parties and civil society, following 3

an agreement in 2002, yet peace has never been materialized. As the situation stands today, the conflict is concentrated in certain regions with dire effects on children been recruited daily both within the DRC as well as from border countries such as Uganda and Rwanda. The areas of the 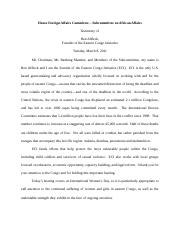 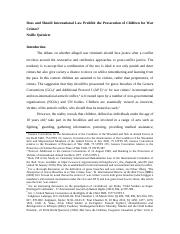 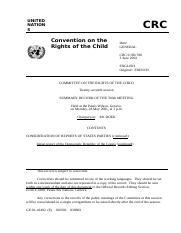 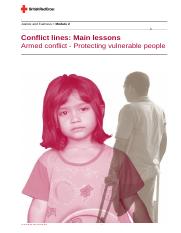 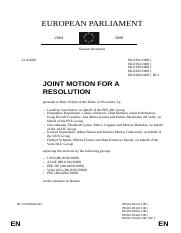