What is the nature of the early- and later-experience issue in development? ©  Rubberball/PictureQuest RF Nature and Nurture   The   nature-nurture issue   involves the extent to which development is influenced  by nature and by nurture. Nature refers to an organism's biological inheritance, nurture to its  environmental experiences. According to those who emphasize the role of nature, just as a sunflower grows in an orderly way— unless flattened by an unfriendly environment—so too a human grows in an orderly way. An evolutionary  and genetic foundation produces commonalities in growth and development (Brooker, 2015; Bugenthal,  Corpuz, & Beaulieu, 2015; Cowan, 2015). We walk before we talk, speak one word before two words,  grow rapidly in infancy and less so in early childhood, experience a rush of sex hormones in puberty,  reach the peak of our physical strength in late adolescence and early adulthood, and then decline  physically. Proponents of the developmental influence of nature acknowledge that extreme environments —those that are psychologically barren or hostile—can depress development. However, they believe that  basic growth tendencies are genetically programmed into humans (Mader, 2014). developmental  connection Personality Is personality more stable at some points in adult development than at others? Connect to “ The Self,  Identity, and Personality .” By contrast, others emphasize the impact of nurture, or environmental experiences, on development  (Leventhal, Dupere, & Shuey, 2015; Thompson, 2015). Experiences run the gamut from the individual's  biological environment (nutrition, medical care, drugs, and physical accidents) to the social environment  (family, peers, schools, community, media, and culture). Stability and Change  Is the shy child who hides behind the sofa when visitors arrive destined to  become a wallflower at college dances, or might the child become a sociable, talkative individual? Is the  fun-loving, carefree adolescent bound to have difficulty holding down a 9-to-5 job as an adult?  These  questions reflect the   stability-change issue ,   which involves the degree to which early traits and  characteristics persist or change as a person matures. Many developmentalists who emphasize stability in development argue that stability is the result of  heredity and possibly early experiences in life. Developmentalists who emphasize change take the more

optimistic view that later experiences can produce change. Recall that in the life-span perspective,  plasticity—the potential for change—exists throughout the life span.

Learn more about The Lottery with Course Hero's FREE study guides and infographics! 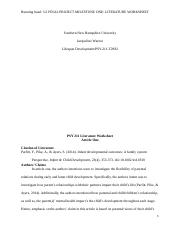 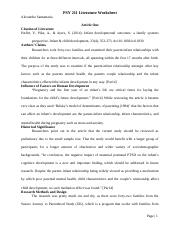 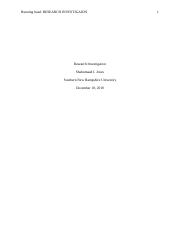 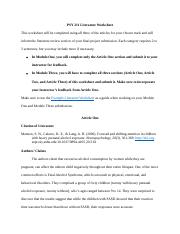 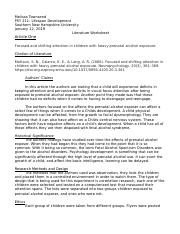 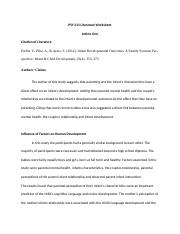