Fies any action that would conventionauy be termed

fies any action that would conventionaUy be termed "immoral," for as the servant of "Life" he feels justified in any act of violence or coercion. In fact, it is because he is a selfless true beUever, fuU of "loyalty to humanity" {Silent 138), that Weston is especiaUy dangerous (as Lewis impUes in his conception of Weston, not Devine, as Ransom's primary antagonist in the first two volumes of the trilogy), for Weston's devotion to this one "good" encourages him to discard aU other virtues. In the final volume of the trilogy, Lewis reveals other types of ethical fai?ng among Weston's associates, from the featureless determinism of Frost to the opportunistic cunning of Feverstone. In the evolution from Weston's devotion to experimental science to the Progressive Element at Edgestow CoUege and the secretive authoritarian society at Belbury, Lewis provides a sense of the range and practical tendencies of modern secular ethics, and this evaluation finds a close parallel in O'Connor's treatment of ethics in Everything That Rises Must Converge. Like Weston, the character of Sheppard in "The Lame ShaU Enter First" is bUnded by his idolatry of science. As Richard Giannone points out, Sheppard "buys the telescope and microscope to instruct the two boys [his son Norton and his temporary ward, Rufus Johnson] about the enormous and minute as pects of the cosmos, in the beUef that everything there is can be seen and everything that can be seen is explainable" (209). The ethical conse quences of this materiaUstic ph?osophy?confusion, fear, and the loss of freedom?are made apparent in the course of O'Connor's story, for in this aUegory of the soul's neglect we are forced to examine the radical condition of loss at the heart of genuine human love. Among the many forms of suffering that are present in O'Connor's fiction, the worst is the condition of spiritual torment resulting from the denial of God's love. To deny the worth of oneself and others and to ignore the worth of the cre ated world is to reject the basis for loving communion, yet, as both Lewis and O'Connor make clear, "love for others," in and of itself and without a basis in reUgious thought, is Umited as an ethical and spiritual agent. Those characters in O'Connor's fiction, such as Sheppard, who "love deeply" wh?e at the same time denying the need for grace are often seen to engage in a destructive and narcissistic form of "love." "The natural loves are not self-sufficient," Lewis writes in The Four Loves. "Something else, at first vaguely described as 'decency and common sense,' but later This content downloaded from 47.203.94.143 on Sun, 30 Aug 2020 21:23:47 UTC All use subject to

114 Southern Literaryjournal revealed as goodness, and finaUy as the whole Christian Ufe in one partic ular relation, must come to the help of the mere feeUng if the feeUng is to be kept sweet" (116). Without knowledge of the foundation of love, the agonized sufferer is open to the worst sorts of misunderstanding, often taking the form of a travesty of reUgious beUef. 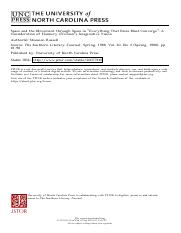 Space and The Movement Through Space in Everything That Rises... by Shannon Russell.pdf 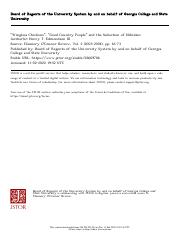 _Wingless Chickens__ _Good Country People_ and the Seduction of Nihilism.pdf 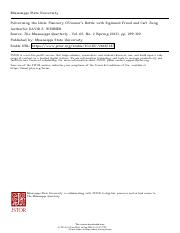 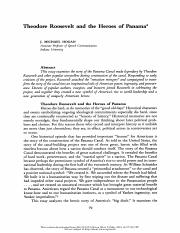 Writing Assignment 1 - Theodore Roosevelt and the Heroes of Panama.pdf 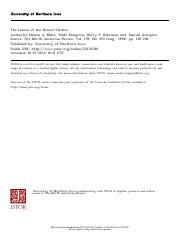 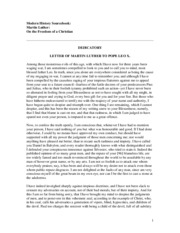 Martin Luther On the Freedom of the Christian