19 18 On taking office in 1992, the Clinton administration withdrew most US troops from Somalia then waged an aggressive kinetic campaign against factional leader Mohammed Farah Aideed. The result was a military and political disaster that prevented any response to the Rwandan genocide on grounds of “political” liability. See the author’s “Hard Day’s Night: A Retrospective on the American Intervention in Somalia,” Joint Force Quarterly 54 (July 2009): 128-135. 19 International Security Assistance Force Afghanistan Mission Statement , mission.html.

66 Parameters 42(4)/43(1) Winter-Spring2013 If soldiers and voters are to understand and support something as serious as war, it should be explained—and explainable—in brutally simple language. If we cannot do so, we should go back to the drawing board. Limit Your Level of Ambition. US interventions in Korea, Vietnam, Iraq, and Afghanistan evolved into protracted, painful, debilitating, and indecisive conflicts. In contrast, Grenada, Panama, and the Gulf War were quick, overwhelming successes. The difference between the two categories is apparent. A strategy with clear, achiev- able aims matched with ample resources usually wins. Fuzzy, overly ambitious goals supported by inadequate resources usually do not. Get Comfortable with Bad Options. When President George W. Bush decided to send 30,000 additional “surge” troops to Iraq in late 2007, he did so against the advice of the uniformed military, the Secretaries of State and Defense, and his Vice President. “Doubling down” when most thought defeat was inevitable, was not popular. Few things in war are. A clearly optimal way ahead rarely presents itself. For strategists, reality can often mean choosing the least worst from a range of “bad” options. The courage to make hard decisions is neces- sary equipment for strategists. Be Careful When Choosing Sides. Most conflicts will force us to choose sides, but rarely will our choices be savory. The history of conflict since the end of World War III has often been messy and ambiguous, with “allies” like Diem, Tudjman, Maliki, and Karzai often implicated in corruption and human rights abuses. This reality may force us to pit our values against our interests and to make hard and painful choices with unknown consequences. This judgment must be made by presidents and prime ministers as an inherently political calculation. Rarely can it be avoided or evaded. Sometimes, as in the Balkans, holding our nose and going with soiled allies can lead to better outcomes. In others, as we see in Iraq and Afghanistan, those choices may be our undoing. Challenge Your Assumptions. Ideology can be a primary driver for use of force, and it is often buttressed with bad assumptions. In Vietnam, President Lyndon Baines Johnson and his principal advisers assumed North Vietnam was a proxy for Moscow, not a true nationalist movement. In Kosovo in 1999, both North Atlantic Treaty Organization (NATO) and US senior leaders presumed that a quick, one week air campaign would drive Serbian forces out. In Iraq in 2003, the admin- 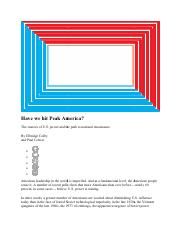 Have we hit Peak America.pdf 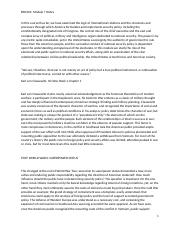 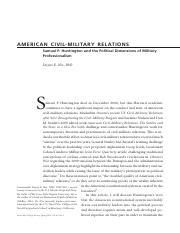 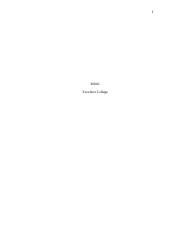 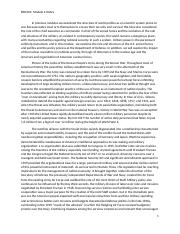 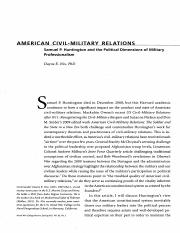