The packaging in which the products are shipped is

records of the fabricator. The packaging in which the products are shipped is referenced to this documentation. In some cases, the fabricator may purchase materials through a warehouse. When this is the case, the warehouse must transmit the necessary documentation from the manufacturer to the fabricator. Cutting and Finishing Steel What methods are available for cutting steel and what is the corresponding range of utility for each ? The following methods are commonly used to cut steel:

APPENDIX PAGE 8 1. Friction sawing, which is performed with a high-speed rotary blade, is commonly used by steel produc- ers and is limited only by machine size. This cutting method, however, is no longer commonly used in fabrication shops. 2. Cold sawing, whether by rotary saw, hack saw, or band saw, is limited only by machine size. 3. Oxygen-acetylene (and related fuel) flame cutting, which can be mechanically or hand-guided, is com- monly used for general cutting and edge preparation operations, such as coping, beveling, notching, etc.; its utility is virtually unlimited. 4. Plasma cutting, which is mechanically guided, is generally useful for cutting plate of up to 3/4-in. thick- ness. 5. Laser cutting, which is mechanically guided, is generally useful for cutting plate; thickness limitations vary. 6. Shearing, which is performed with mechanical presses, is generally useful for cutting plates and angles and is limited only by machine size and capacity. Additional minor material removal and finishing may also be accomplished by one of the methods listed in the next question. What methods are commonly used to provide finished surfaces, when required ? Some of the cutting methods in the previous question result in surfaces that are finished without further treatment. When this is not the case, the following methods are commonly used to provide finished surfaces: 1. Milling, which is commonly used to bring members to their required length and end finish. 2. Face machining, which can be used to finish large areas to exact dimensions. 3. Planing. 4. Grinding, which is commonly used for edge preparation, including treatment of flame-cut edges, removal of burrs, etc. when required. Can the end of a column, as received from the rolling mill, be considered to be a finished surface ? Yes, provided the mill cut is at right angles to the column axis and meets the surface roughness requirements in ASME B46.1. Is it commonly necessary to mill bearing surfaces after sawing ? No. As stated in the 1999 AISC LRFD Specification Section M2.6, "compression joints which depend on contact bearing ... shall have the bearing surfaces of individually fabricated pieces prepared by milling, sawing, or other suitable means." The 2000 AISC Code of Standard Practice Section 6.2.2 Commentary states that "Most cutting processes, including friction sawing and cold sawing, and milling processes meet a surface roughness limitation of 500 per [ASME B46.1]." Cold-sawing equipment produces cuts that are more than satisfactory. 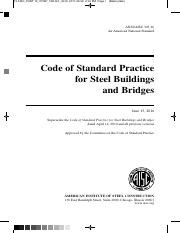 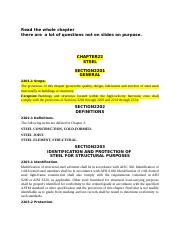 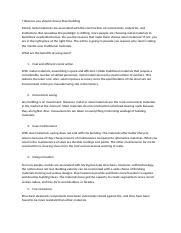 6 Reasons you should choose Steel building.edited.docx 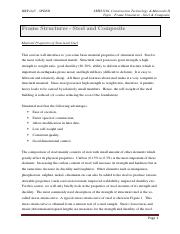