31 it is pertinent to say that the common dimensions

31 It is pertinent to say that the common dimensions which are more often seen in the list of companies’ CSR practices are treated as discretionary responsibilities as per the definitions of Carroll. 32 These discretionary issues generally get more importance than legal or quasi-legal ones such as labour, human rights, environ- ment and ethical issues. 4.4.1.2 CSR Practiced as a More Buyer-Driven Business Agenda 33 For the private enterprises of Bangladesh, generally there are four major ways to get access to the global market: First, as producers selling into final markets on an arms-length basis; second, as group of producers; third, as suppliers of global supply chains where the global buyers coordinate the production networks; and finally, as part of transnational corporation driven vertically integrated network. All most all the companies of this sector are in the global market through the global supply chain. Global supply chain is a quasi-hierarchical relationship between buyers and producers, in which the two parties are not joined by ownership but engage in a long-term relationship. In this relationship one of the parties tends to be dominant 30 A most noticeable environmental protection activity is drawn up from country’s largest affores- tation programme by British-American Tobacco. It distributes annually more than 3.5 million saplings. In the last 2 decades it has distributed and planted more than 42.5 million saplings. Most of these are located in the tobacco growing areas of Kushtia, Rangpur, Mankigonj and Chittagong including the developing areas of Lama and Alikadam in the Chittagong Hill Tracts. In recognition of this, the company received the Prime Ministers’ award for their contribution to the country’s total afforestation programme. 31 For example, Dutch-Bangla Bank in its financing for industrial establishments considers whether the project complies with the environmental standards. As part of the project financing activities the bank introduced a guideline demanding assessment of environmental and social impact of the project to ensure that its operation would be eco-friendly. Likewise, Islamic Bank, Bangladesh in the final approval of industrial project considers whether the proposed project has already obtained environmental clearance from the Department of Environment of Bangladesh. In addition, the bank in its investment in the dying and printing industry encourages the enterprises to set up ETP. See Islamic Bangladesh Limited, Annual Report (2006) 65. 32 Caroll’s definition of CSR includes four responsibilities of CSR namely, economic (must do), legal (have to), ethical (should do), and discretionary (might do). Discretionary responsibility refers to philanthropic and welfare activities. For details, see A.B.. Carroll, ‘The Pyramid of Corporate Social Responsibility: Towards the Moral Management of Organisational Stakeholders’ (1991) 34:4 Business Horizons 39, 40, 41. 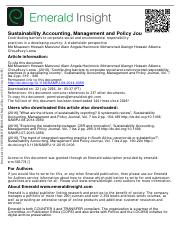 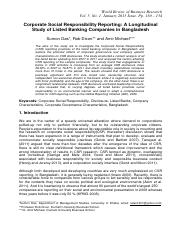 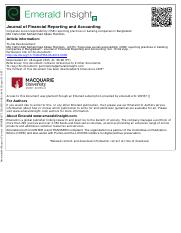 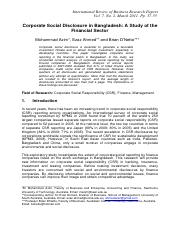 6- 2011- Corporate Social Disclosure in Bangladesh A Study of the Financial Sector.pdf 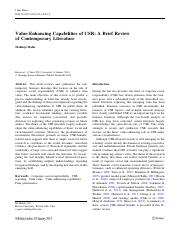 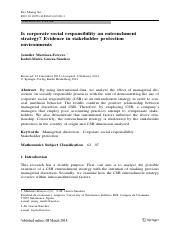 Is corporate social responsibility an entrenchment.pdf