Last line very definitive of masculinity in ancient Greece Athletic Competition in the Iliad  “But Achilles held the armies on the spot. He had them sit in a great and growing circle – now for funeral games – and brought from his ships the trophies for the contests: cauldrons and tripods, stallions, mules and cattle with massive heads, women sashed and lovely, and gleaming gray iron. First, for the fastest charioteers he set out glittering prizes….Then Achilles made his way through the crowds of troops and set out prizes next for the bruising boxing match….Quickly Achilles displayed before the troops the prizes set for the third event, the grueling wrestling match….Achilles quickly set out prizes for the footrace….” ( Iliad 23. 296- 822 Trans. R. Fagles, 1990) o Petrocylus goes into battle wearing Achilles’ armour, killed by Hector o Achilles holds funeral  Grave, sacrifices ten Trojan children, funeral games o Entire book narrating funeral games in honour of Petrocylus Homeric Society  Social and political status rests upon: o Lineage  Trace back to Homeric hero or god o Monopoly of violence and wealth  Money to afford armour and time  Money for favours to form alliances  Money for dowry  Homeric society was: o Aristocratic o Militaristic o Hierarchical

 Warrior aristocrats ruled over serf population who worked the land; exchanged produce for protection and other public benefaction  Only the aristocracy could afford to equip and train for war  Highly competitive with other aristocratic clans o Hence the need for continual public display of wealth and martial prowess o Wealth shown by feasts  Social and political cohesion a function of the personal relationships established between heads of aristocratic households ( oikos )  Links established primarily through marriage and xenia o Xenia = guest friendship Kings and Serfs  “Seven Seven citadels he will give you, filled with people, Cardamyle, Enope, and the grassy slopes of Hire, Pherae the sacrosanct, Anthea deep in meadows, rolling Aepea and Pedasus green with vineyards. All face the sea at the far edge of sandy Pylos and the men who live within them, rich in sheep-flocks, rich in shambling cattle, will honor you like a god with hoards of gifts and beneath your scepter’s sway live out your laws in sleek and shining peace.” ( Iliad 9.353ff. Trans. by R. Fagles, 1990) o Achilles being inticed to drop hatred for Agamemnon to come back and help the Greeks o Give Achilles villages and people Aristocrats and Commoners  “The armies took their seats, marshaled into ranks. But one man, Thersites, still railed on, nonstop. His head was full of obscenities, teeming with rant, all for no good reason, insubordinate, baiting the kings – anything to provoke some laughter from the troops. Here was the ugliest man who ever came to Troy. Bandy-legged he was, with one foot clubbed, both shoulders humped together, curving over his caved-in chest, and bobbing above them his skull warped to a point, sprouting clumps of scraggly, woolly hair. Achilles despised him most,

Learn more about The Odyssey and The Iliad with Course Hero's FREE study guides and infographics! 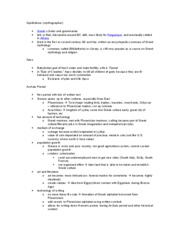 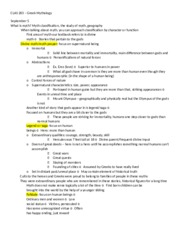 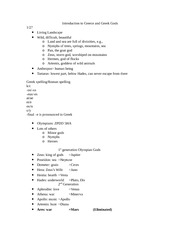 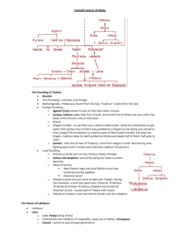 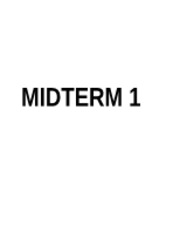