mack et al ., 2011; Albers and Nathan , 2012; Albers et al ., 2013] and some also show that this couples down- ward and subsequently affects the tropospheric circulation [ Crook et al ., 2008; Waugh et al ., 2009]. Aiming at a better understanding of chemistry-climate coupling, in this study we introduce SC-WACCM, a new specified chemistry (SC) configuration of WACCM. Rather than solving for the concentration of ozone and other chemical species interactively, as in WACCM, ozone together with chemical and shortwave heat- ing rates are simply prescribed in SC-WACCM. In this paper, we focus on describing and validating SC- WACCM, and so limit our analysis to preindustrial integrations. In a future paper, we will examine the effect of prescribed versus interactive chemistry on the Southern Hemisphere climate during the historical period of ozone depletion. This paper is laid out as follows. In section 2, we describe the new model and, in section 3, we outline the model integrations that will be analyzed. Section 4 presents the model validation in four subsections: ozone and heating rates in section 4.1, the zonal mean climate in section 4.2, the surface climate in section 4.3 and the climate variability in section 4.4. We discuss the computational costs of SC-WACCM in section 5 and, finally, in section 6, we summarize our findings and conclude. 2. Model Description SC-WACCM is part of the NCAR Community Earth System Model (CESM) [ Hurrell et al ., 2013]. The atmos- pheric component of the model is a modified version of CESM1(WACCM) [ Marsh et al ., 2013], the stratosphere-resolving (i.e., ‘‘high-top’’), coupled-middle atmosphere chemistry version of CESM1, hereafter referred to as WACCM. SC-WACCM has the same 66 vertical levels and horizontal resolution (1.9 ² latitude by 2.5 ² longitude) as WACCM, and the model lid remains at 5.1 3 10 2 6 hPa (approximately 140 km). In the integrations presented here, SC-WACCM is coupled to identical interactive land, ocean, and sea ice models as in the WACCM integrations conducted as part of the Coupled Model Intercomparison Project Phase 5 (CMIP5) described in Marsh et al . [2013]. Both models include the same parameterization of nonorographic gravity waves (generated by frontal systems and convection), and also the parameterized surface stress due to unresolved topography, referred to as turbulent mountain stress, or TMS [ Richter et al ., 2010]. The para- meterized auroral oval, an important source of nitrogen oxide (NO) above 100 km, is omitted in SC-WACCM for computational efficiency, but NO is prescribed from WACCM integrations that do include this source (see below). In describing the configuration of SC-WACCM, we start by distinguishing two regions, in which the effects of middle atmosphere radiation and chemistry are treated differently. These regions are merged together via a hyperbolic tangent weighting function from approximately 63–70 km altitude [ Neale et al ., 2012]. Fig- ure 1a shows the vertical resolution of WACCM/SC-WACCM and highlights these two regions. The overlap region is shaded in gray. We also note that all prescribed fields are specified globally at a frequency deter- 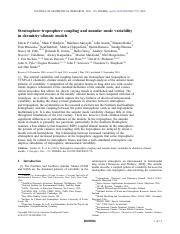 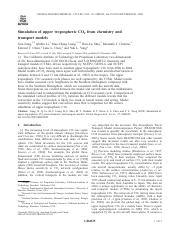 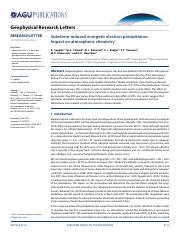 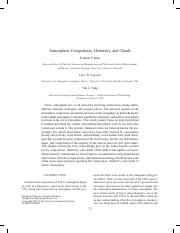 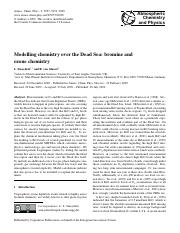