On the kissingers set sail for new york city by way

On August 20, 1938, the Kissingers set sail for New York City by way of London. His family was extremely poor upon arrival in the United States, and Kissinger immediately went to work in a shaving brush factory to supplement his family's income. At the same time, Kissinger enrolled at New York's George Washington High School, where he learned English with remarkable speed and excelled in all of his classes. One of his teachers later recalled of Kissinger, "He was the most serious and mature of the German refugee students, and I think those students were more serious than our own." Kissinger graduated from high school in 1940 and continued on to the City College of New York, where he studied to become an accountant. Time at Harvard

In 1943, Kissinger became a naturalized American citizen and, soon after, he was drafted into the army to fight in World War II. Thus, just five years after he left, Kissinger found himself back in his homeland of Germany, fighting the very Nazi regime from which he had once fled. He served first as a rifleman in France and then as a G-2 intelligence officer in Germany. Over the course of the war, Kissinger abandoned his plan to become an accountant and instead decided that he wanted to become an academic with a focus on political history. In 1947, upon his return to the United States, he was admitted to Harvard University to complete his undergraduate coursework. Kissinger's senior thesis, completed in 1950, was a 383-page tome that tackled a vast subject matter: the meaning of history. It became Harvard lore that his daunting manuscript which, though unrefined, showed flashes of brilliance, prompted Harvard to impose a rule limiting the length of future theses, but according to Walter Issacson’s 1992 biography, this “Kissinger Rule” is most likely a myth. Upon graduating summa cum laude in 1950, Kissinger decided to remain at Harvard to pursue a Ph.D. in the Department of Government. His 1954 dissertation, A World Restored: Metternich, Castlereagh, and the Problems of Peace, 1812-1822, examined the efforts of Austrian diplomat Klemens von Metternich to reestablish a legitimate international order in Europe in the aftermath of the Napoleonic Wars. Metternich proved a profound influence on Kissinger's own later conduct of foreign policy, most notably in his firm belief that even a deeply flawed world order was preferable to revolution and chaos. 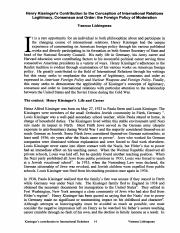 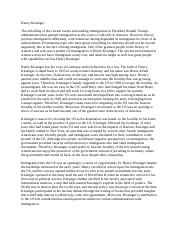 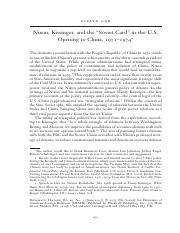 Nixon, Kissinger, and the "Soviet Card" in the U.S. Opening to China.pdf 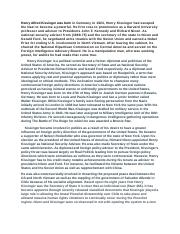 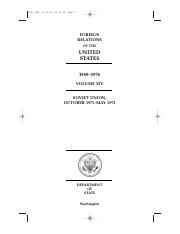