24 classification of flow phenomena there are many

2.4 Classification of Flow Phenomena There are many ways in which fluid flows can be classified. In this section we will present and discuss a number of these that will be of particular relevance as we proceed through these lectures. We will begin with some classifications that are quite intuitive, such as whether a flow is steady or unsteady, proceed to ones requiring quite specific mathematical definitions, such as rotational and irrotational flows, and finally describe classifications requiring additional physical insights as in distinguishing between laminar and turbulent flows. It is important to bear in mind throughout these discussions that the classifications we are considering are concerned with the flow , and not with the fluid itself. For example, we will later distinguish between compressible and incompressible flows, and we will see that even though gases are generally very compressible substances, it is often very accurate to treat the flow of gases as incompressible. 2.4.1 Steady and unsteady flows One of the most important, and often easiest to recognize, distinctions is that associated with steady and unsteady flow. In the most general case all flow properties depend on time; for example the functional dependence of pressure at any point ( x, y, z ) at any instant might be denoted p ( x, y, z, t ). This suggests the following: Definition 2.8 If all properties of a flow are independent of time, then the flow is steady ; otherwise, it is unsteady . Real physical flows essentially always exhibit some degree of unsteadiness, but in many situations the time dependence may be sufficiently weak (slow) to justify a steady-state analysis, which in such a case would often be termed a quasi-steady analysis. It is also worth mentioning that the term transient arises often in fluid dynamics, just as it does in many other branches of the physical sciences. Clearly, a transient flow is time dependent, but the converse is not necessarily true. Transient behavior does not persist for “long times.” In particular, a flow may exhibit a certain type of behavior, say oscillatory, for a few seconds, after which it might become steady. On the other hand, time-dependent (unsteady) behavior is generally persistent, but it may be generically similar for all time after an initial transient state; i.e. , the qualitative nature of the behavior may be fixed even though the detailed motion changes with time. Such a flow is often termed stationary . Examples of these flow situations are depicted in Fig. 2.13 in terms of their time series. We note, for the sake of clarification, that in some branches of engineering (particularly electri- cal) some of the flows we here call stationary would be considered steady. Electrical engineers have a tendency to refer to anything after the initial transient has died away as “steady.” For example, a periodic flow following some possibly irregular initial transient would be called steady. But this contradicts our basic definition because a periodic behavior clearly depends on time.

Most Popular Documents for ME MISC 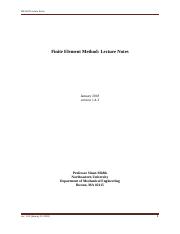 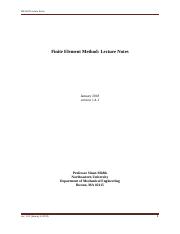 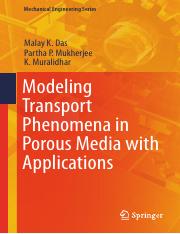 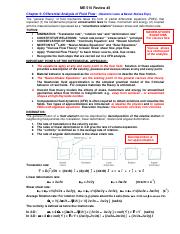 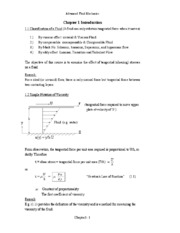 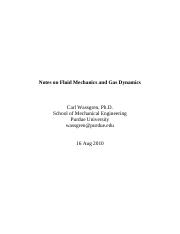