1. Evidence: soybeans 2. Conventional soybeans (overrun with weeds) vs. Roundup Ready Soybeans (no weeds!) 3. Questions that arise: resistance 1. Weeds eventually build up a resistance to "Roundup" 2. This is well known to scientists; has nothing to do with GMO it has to do with biology

3. No amount of technology will guarantee that all weeds are killed/all insects are killed; some are naturally resistant -- will eventually multiply 4. It is indeed becoming a real problem! 1. EXAMPLE: Glyphosate-Resistant Palmer Amaranth has become resistant to pesticide; later on infesting a soybean field 2. What do we do!? 4. Develop crops resistant to other pesticides 1. DiGamba (effective herbicide): resembles Auxin (plant hormone; plant generates to cause growth) 2. Plants grow so fast that there is not enough nutrients to support growth; hence, the plant (aka the weed) dies 3. Issues: recently discovered that DiCamba drifts -- you apply it to a field, but you cannot control whether or not it stays on that field 4. DiCamba Resistant Soy: the seeds are now resistant; some of the spray will drift onto neighbouring fields -- DiCambra drift eventually destroys crops/regular soy (leaves curl up, plants are destroyed) 5. Allegations don't stop at drifting; suggestion that Dicamba is "just another monsanto cancer causing pesticide" -- NO EVIDENCE THAT DICAMBA CAUSES CANCER. 2. Another alternative 1. 2, 4-D Resistance Crops: the seeds have been engineered in such a way that the plants they give rise to will be sprayed by 2, 4-D and they will not be affected but any surrounding weeds will be 2. Activist say: "Take action help stop agent orange corn" 3. Agent Orange: chemical used in Vietnam, sprayed from airplanes, operation "ranch hand" 1. Mixture of 2 herbicides: 2, 4-D and 2,4, 5-T 2. Idea was to defoliate trees to prevent viet kong from hiding under the trees 3. Agent Orange: shipped to vietnam in drums with orange bands, the chemical isn't actually orange 4. Agent Orange: 2,4,5-T ----> one of the components of Agent Orange gave rise to a side product known which is indeed a highly toxic substance 4. Gives rise to birth deformities, carcinogen, please avoid! 1. This chemical has not been made since the 1960's 2. Anything linking 2,4-D to Agent Orange is completely misleading: true that 2,4-D was made to be part of Agent Orange in the Vietnam Era -- it didn't use 2,4-D used 2,4,5-T (no longer manufactured) 3. Most important chemical reactions ever discovered; discovered by Fritz Haber in Germany, combining Nitrogen with hydrogen to make ammonia (could be used to produce fertilizer) mostly in the form ammonium nitrate 4. ammonium nitrate and ammonia: used in war 5. ammonium nitrate: potentially an explosive; used to blow up a building in Oklahoma City 6. Pesticides saves millions and millions of lives, and to say to not use it because of its potential to do harm is outrageous 7. GMO linked to autism: seductive graph, increase in use of glyphosate -- cause and effect relationship 1. Just because two perameters journey together, doesn't mean they are linked.

Learn more about The American and Silent Spring with Course Hero's FREE study guides and infographics! 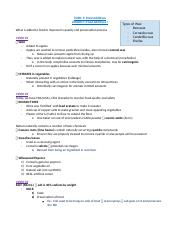 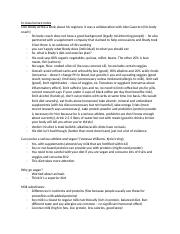 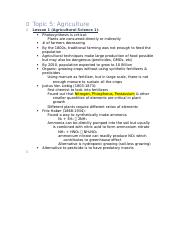 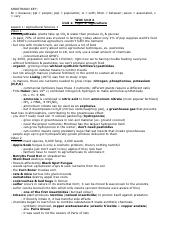 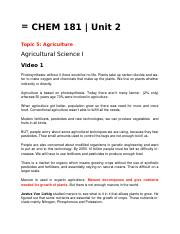 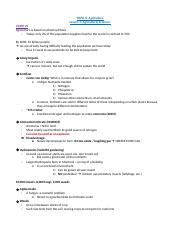