One other key interest for israel with regards to

One other key interest for Israel with regards to Syria is the continued occupation of the Golan Heights. Israel occupied the Golan Heights (as well as East Jerusalem, Gaza, the West Bank, and the Sinai Peninsula during the 1967 Six Day War). For the Israeli leadership, any possible negotiation of a future Syria (and whatever that new state(s) would look like) should not include the Golan Heights. It was reported on April 17th, 2016, that Netanyahu was quoted as saying to his cabinet that “The Golan Heights will remain in Israel’s hands forever.” Netanyahu also called for the world “to recognize finally that the Golan will remain permanently under Israeli control” ( Voice of America, 2016 ) (This of course sparked controversy at the United Nations, with the Security Council speaking out against this statement, saying that the pre-1967 borders will be adhered to, as per international law. Chinese Ambassador Liu Jieyi was quoted as saying that the Israeli “decision to impose its laws, jurisdiction and administration in the occupied Syrian Golan Heights was nul and void and without any international legal effect”” (Al Jazeera, 2016c: UN Rejects Israel’s claim over Syria’s Golan Heights ). In November of 2016, “Israeli jets fired two missiles from Lebanese airspace toward the outskirts of the Syrian capital Damascus early Wednesday, the official Syrian news agency said, in a strike on an unknown target that caused loud explosions” ( Aji, 2016 ). Also in November, days earlier, “Israeli aircraft hit a machine gun-mounted vehicle inside Syria, killing four Islamic State-affiliated militants inside after they opened fire on a military patrol on the Israeli-controlled side of the Golan Heights. The violence appeared to be a rare case of an intentional shooting ambush by Islamic militants targeting Israeli troops” (Aji, 2016). They have continued their military actions in Syria in 2017, going after what they say are weapons that are meant for al-Assad ally Hezbollah ( AFP, 2017 ). Furthermore, Israeli leadership also accused Al-Assad’s forces of shooting at Israeli planes (AFP, 2017). Egypt and the Syrian Conflict While Egypt has not sent a military presence to Syria, the government under Abdel Fattah el-Sisi has an interest in the country. El-Sisi, similar to allies such as Saudi Arabia and the United States, would prefer Al-Assad and his government to leave power in Syria. However, along with this interest, El-Sisi is also concerned with what is transpiring in Syria because of the domestic issues of terrorism that Egypt continues to face. Egypt has continued to fight militant jihadist groups in the Sinai Peninsula for years. In particular, the government is now fighting Islamic State affiliate groups. For example, “The well- armed affiliate — known as Wilayat Sinai — has grown bolder since it asserted responsibility for the October bombing of a Russian charter flight over the Sinai Peninsula, killing all 224 aboard. 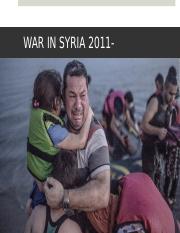 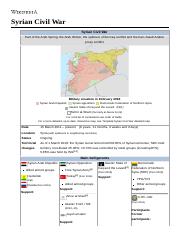 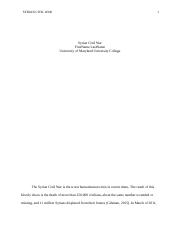 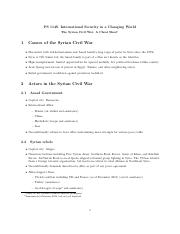 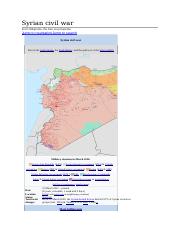 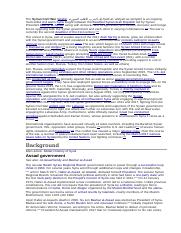