, 2010; Tahir and Razali, 2011) Brazil (e.g., Souza et al. ,2012) China (e.g., Zou and Hassan 2017; Nan, 2015) and Nigeria (Ahmed and Manab, 2016) . Therefore, following the suggestions of different researchers and authors in the field of ERM who recommended to do more research in developing countries (e.g., Manab et al. 2010; Tahir and Razali, 2011, Ahmad et al ., 2014), this study attempts to extend the scope by evaluating ERM in Iran as a developing country in the Middle East which suffers from a lack of study in this field. This is important, as ERM has never been adequately addressed in Iranian businesses, especially in the financial institutions in context with practical terms. The reasons that have initiated this study to select Iran and its financial institutions as the sample of the study is related to the nature and importance of the financial sector. According to the literature, financial firms are among the first companies which adopted and implemented ERM system and hire chief risk officer (Platt, 2004; Beasley et al. , 2005; Hoyt and Liebenberg, 2011). By nature, they are exposed to face a wide array of risk because they deal with various types of customers, complicated trades, and an extensive range of financial assets. Therefore, risk management has more importance among these institutions than others (Talwar, 2011; Shafique et al. , 2013). Moreover, they have a vital effect on the nation‟s economy due to their intermediary role in surplus and deficit units (Llewellyn, 1999) as well as their efficient role in resource allocation in today‟s modern economy (El-Hawary et al. , 2007). Consequently, the health and success of these companies are significant (Llewellyn, 1999; Hoyt and Liebenberg, 2011). Moreover, this research followed the previous studies in the literature (Aebi et al ., 2012; Hoyt and Liebenberg, 2011; McShane et al ., 2011; Grace et al ., 2015) which have been conducted on financial institutions. Aligned with that, based on Iran's 20-year perspective (vision) plan, Iran is going to be ranked first in the Middle East region in terms of economic, scientific and technology levels by the year 2025. In this regard, as these institutions have an important effect on the economy of Iran, their health and success are very important. In other words, the success of these institutions is important for the economic growth of Iran to obtain the first rank position in the Middle East by 2025. Existence of any problem and crisis in this sector could have major negative effect on the total economy of the country. Moreover, due to the appearance of difficulties such as international sanctions, high exchange rate volatility, and establish unauthorized financial institutions, the improvement of risk management among financial institution of Iran is necessary. Therefore, sufficient ground exists for such studies in Iran that is mainly outside the scope of international researches and is underutilized as a selected sample in the area of ERM. Further, selecting one industry helps the researcher to control the differences that may arise from regulatory and market variation across industries (Hoyt and Liebenberg, 2011). In addition, a specific industry analysis has more significant superior internal validity than a multi-industry analysis (Ittner et al. , 2003). 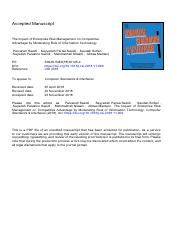 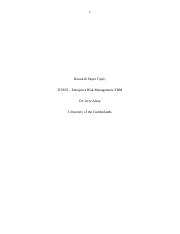 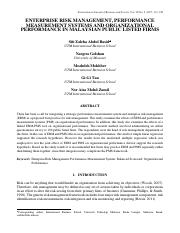 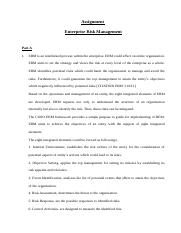 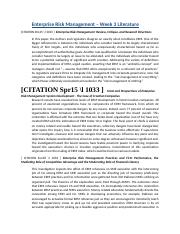