There had effectively been nowhere for the deceased

that all the shots fired through the door would almost inevitably have struck a person behind it. There hadeffectively been nowhere for the deceased to hide.

[39]In addition, Captain Mangena testified that the Black Talon ammunition the accused had used was specificallydesigned for the purpose of self­defence. It would penetrate a wooden door without disintegrating but wouldmushroom on striking a soft, moist target such as human flesh, causing devastating wounds to any person whomight be hit. The veracity of this is borne out by the photographs depicting the injuries the deceased sustained,correctly described by the trial court as being "horrendous".[40]All of this was circumstantial evidence crucial to a decision on whether the accused, at the time he fired thefatal four shots, must have foreseen, and therefore did foresee, the potentially fatal consequences of his action.And yet this evidence was seemingly ignored by the trial court in its assessment of the presence ofdolus eventualis.Had it been taken into account, the decision in regard to the absence ofdolus eventualismay well have beendifferent. In the light of the authorities I have mentioned, to seemingly disregard it must be regarded as an error inlaw.[41]Consequently, the first two questions reserved for decision must be answered in favour of the prosecution tothe extent that I have indicated. I thus turn to the third question, namely, whether the trial court was correct "in itsconstruction and reliance of an alternative version of the accused and that this alternative version was reasonablypossibly true". The question as posed is vague. Questions reserved for decision under section 319 of the CPAshould be clearly formulated so that this Court can identify with precision the legal issue it is called upon to decide.At best for the State, the question asks no more than whether the accused's version accepted by the trial courtwas reasonablyPage 24 of [2016] JOL 34806 (SCA)possibly true. This is a factual decision. As already set out, and on the strength of the authorities to which I havereferred, a finding of fact falls beyond the scope of what this Court may decide under section 319. In any event, inthe light of my findings in regard to the first two questions, the third question, even if it can be construed as being apoint of law, seems superfluous.[42]To summarise, in regard to the questions of law reserved for decision of this Court: 1. The principles of dolus eventualis , including error in objecto , were incorrectly applied to the facts found to be proved relevant to the conduct of the accused; and 2. The trial court did not correctly conceive and apply the legal principles pertaining to circumstantial evidence. [43] The question then becomes, what should this Court do in the light of these findings? The powers of a court in the case of an appeal on a question of law reserved are set out in section 322 of the CPA as follows: "(1) In the case of an appeal against a conviction or of any question of law reserved, the court of appeal may­ (a) allow the appeal if it thinks that the judgment of the trial court should be set aside on the 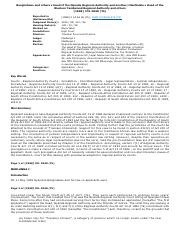 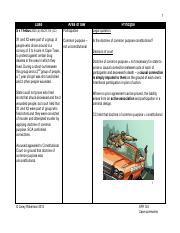 CASE SUMMARIES FOR Criminal Law- Elements of a Crime.pdf 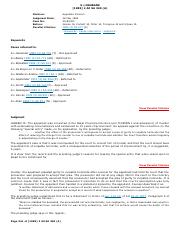 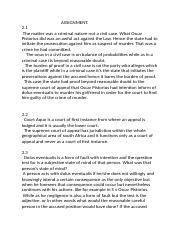 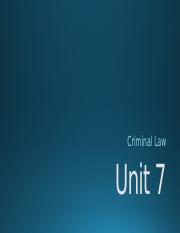 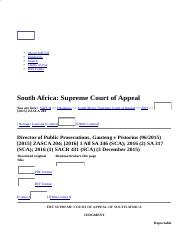