Q 3797, 3798 (1990). 6. For example, since the 1990 elections, even President Bush has indicated that he will support both the elimination of political action committees ("PACs"), Maureen Dowd, State of the Union Address. N.Y. TIMES, Jan. 30, 1991, at Al, and a constitutional amendment limiting the terms of members of Congress, Michael Oreskes, Bush Backs Move For Limiting Terms of U.S. Lawmakers, N.Y. TIMEs, Dec. 12, 1990, at Al. 7. See Bruce A. Ackerman, The Storrs Lectures: Discovering the Constitution, 93 YALE L.J. 1013, 1039 (1984) (discussing the importance of "sustained debate and struggle" among people when formulating "higher," constitutional legal principles). 8. At this point, I would like to explain why an interpretivist approach is necessary to analyze and improve representative legislation. I will illustrate by discussing two alternatives to interpreti- vism. The first alternative is to describe what Congress is doing now as representative legislation, and let this definition justify Congress' institutional existence. The problem with this circular ap- proach is one of relativism. If the way in which government is conducted is judged only by prevail- ing practices, government may devolve into a free-for-all in which Congress may set rules for itself that progressively deteriorate over time. Textual and historical interpretation provides a more de- tached standard by which to judge the operation of government. A second alternative to interpretation is to compile and analyze currently available knowledge on government and then formulate the "best" modern theory of representative legislation. After all, why should modern Americans be the prisoners of James Madison and company? The answer is that using the Constitution's text and history as a standard does not make modern citizens

TERM LIMITATIONS The second stage of the analysis (Part II) will measure Congress against these constitutional standards of legitimacy and effectiveness. The third stage of the analysis (Parts III, IV, and V) will explore the best way to restore congressional legitimacy and effectiveness. In Part III, campaign finance re- form and the judicial regulation of the political process will be criticized as grossly inadequate solutions to the problem. Part IV will review antifederalist arguments for a rotation of legislators, and will examine modern proposals for limiting congressional tenure. Finally, Part V will propose limiting members of Congress to one term in each House. This Part will argue that the elimination of the reelection incentive will improve representative legislation by strength- ening parties, and by giving representatives incentives to solve national problems through deliberation and cooperation. I. REPRESENTATIVE LEGISLATION: LEGITIMACY AND EFFECTIVENESS A. Starting Points: Article I and the Preamble One can begin an analysis of Congress as a political institution by asking two questions: (1) What is Congress supposed to be? and (2) What is Con- gress supposed to do? Superficially, these questions are answerable with one sentence: Congress is a representative body that 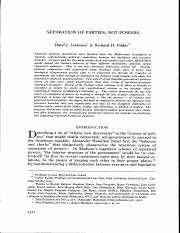 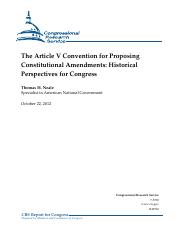 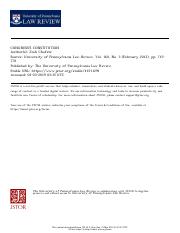 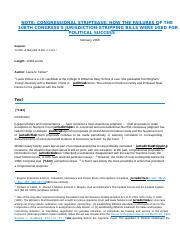