Mehran University of Engineering & Technology, Jamshoro
GEOGRAPHY
GEOGRAPHY 121
39 2 It is due to the North Atlantic Drift which is a warm water ocean current

39. (2) It is due to the North Atlantic Drift which is a warm water ocean current, an extension of the Gulf Stream. This current keep the ports along the coasts warm enough to stay open year around. 40. (1) The Persian Gulf and its coastal areas are the world’s largest single source of crude oil. The oil-rich countries (excluding Iraq) that have a coastline on the Persian Gulf are referred to as the Persian Gulf States. 41. (1) The mid-latitude grasslands are called the world’s bread baskets regions of grain and livestock production. They are found in the middle latitudes of South America, North America, Africa and Asia. 42. (2) The distance between London and Perth is 8989 miles (or 14466 kilometres). The shortest air route from Perth to London is Perth-Ankara, Paris-London. 43. (1) Switzerland has no mineral resources; two third of its area is covered with forests, lakes and mountains. Due to the paucity of mineral resources, it has to im- port, process and resell them as products. 44. (1) The world’s largest producers of natural diamonds are Russia, Congo and Botswana, all together account- ing for 60% of the global diamond production. The government-run super-major ALROSA accounts for ap- proximately 95% of all Russian diamond production. 45. (4) In 2009, Australia was the top producer of bauxite with almost one-third of the world’s production, followed by China, Brazil, India, and Guinea. In November 2010, Nguyen Tan Dung, the Prime Minister of Vietnam, an- nounced that Vietnam’s bauxite reserves might total 11000 Mt; this would be the largest in the world. 46. (4) Researchers have recently focused on the economic agents which play a critical role in deforestation. Some such agents are: soy beans, beef, cattle, palm oil, timber and pulp, wood for fuel, etc. The world’s growing appetite for beef has contributed significantly to the destruction of tropical rain forests. 47. (3) Port Hedland in Western Australia is the world’s largest mining port. It is one of the largest iron ore loading ports in the world and the largest in Australia. It is also the busiest bulk export ports in the world. 48. (4) Chile is the world’s largest copper producing coun- try. It hosts six of the 10 largest copper mines in the world; the remaining four are located in Peru, Mexico and Indonesia. Escondida copper mine in the Ataca- ma Desert in Chile is the world’s largest copper mine by reserve. 49. (1) Kenya, China, Sri Lanka India and Vietnam are the leading exporters of tea in the world. These five coun- tries are the major producers of tea as well. The Unit- ed Kingdom is one of the major importers of tea. India is the world’s largest tea-drinking nation. 50. (2) Trans-Siberian Railway, that connects Moscow with the Russian Far East and the Sea of Japan, is the longest railway line in the world with a length of 9,289 km. There are connecting branch lines into Mongolia, China and North Korea. 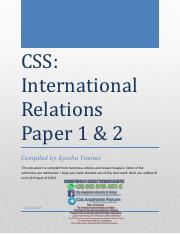 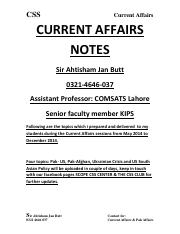 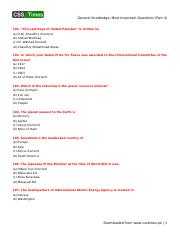 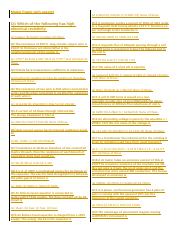 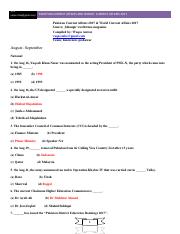