Chick, H. & Hunt, D. Pre-service primary teachers judgements about the probability of everyday events (Vol. 1, pp. 147-154). A group of pre-service primary teacher students were asked to evaluate the probability of some everyday events, by (i) ranking the events in order of likelihood, (ii) assigning each event a probability word, and (iii) giving each event a numerical probability. Mismatches between ranking and numerical values were found, some students had difficulty estimating values for events with probabilities close to certain or impossible, and the ambiguity of some probability words was revealed. Students indicated that they thought that making such evaluations was associated with numeracy understanding, but not to the same extent as a more traditional computational number question. English, L. Students' statistical reasoning in constructing newspaper articles (Vol. 1, pp. 194-201). This paper addresses the final year of a 3-year longitudinal international study, which addressed the development of 9th and 10th grade students' statistical knowledge and reasoning processes. The study engaged students in the construction of data-based projects, which involved the processes of designing, analysing, interpreting, representing, communicating, and thinking critically and reflectively. This paper addresses students' reasoning on one of the final activities of the programme, namely, students' construction of newspaper articles. The findings highlight the importance of placing special emphasis on students' abilities to think about data and beyond data. Nisbet, S. Representing categorical and numerical data (Vol. 2, pp. 378-385). Teacher-education students were given the task of drawing two graphs, one to represent categorical data, the other to represent numerical data. A statistical-thinking framework was used to evaluate the graphs, produced by assigning levels of thinking to the graphs and comparing the levels associated with the two types of data. The levels of thinking associated with the categorical data were higher than those associated with the numerical data. More students were able to organise the categorical data compared to the numerical data. The levels of thinking were not related to the presentation of the data. Watson, J. & Moritz, J. The role of cognitive conflict in developing students' understanding of chance measurement (Vol. 2, pp. 523-530). In individual interviews, twenty students in each of grades 3, 6, and 9 responded to a task involving chance measurement, then viewed video recordings of other students' conflicting responses, and decided which response they preferred. Seven students improved their levels of reasoning, and seven agreed with the higher level prompts without expressing reasoning. Only two students agreed at some point with lower level prompts, and both reverted to the level of their original response in conclusion. Educational implications are noted.

Most Popular Documents for ENGLISH 101 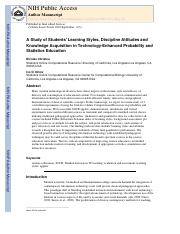 A Study of Students' Learning Styles, Discipline Attitudes and Knowledge Acquisition in Technology-E 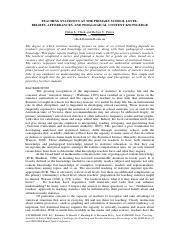 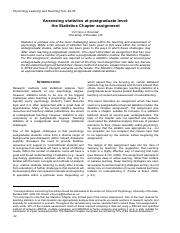 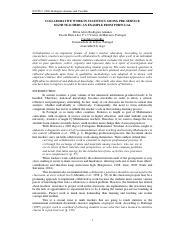