DeVry University, Long Beach
PHIL
PHIL 447
Wed like to think we were prescient since that very issue came up in a big way

Wed like to think we were prescient since that very

aren’t. We’d like to think we were prescient, since that very issue came up in a big way a few years later, with the federal and some state governments paying for phony news spots that promoted their programs and were passed off as real news. Every edition we note the continued degeneration of the mainstream news media, and we include the major newspapers as well as television news. We’re tempted to blame the cable networks for leading the downward spiral—Fox Network’s coverage of the war in Iraq is a leading example—but a failure to put the public’s best interest first seems to be the case throughout the entire industry, and this fundamental failing has caused not only a loss of confidence among many informed citizens but, in the opinions of many, a serious threat to democratic values. IM – 4 | 1

Advertising, as we’ve always said, has always been pretty much pure slant. In fact, we’re becoming hardened in this view. We’re now willing to tell students that, if a person has a stake in an issue (e.g., if it’s a product the person is selling), then they definitely should not be counted on to give an unbiased view of it in comparison to competing products. They may be as sincere as a martyr, but they are still likely to give a different view from one developed by a neutral party. There may be the occasional exception to this, but it’s wise not to presume you’re talking to one. Finally, we have to point out a surprising (to us) development. In this chapter we mention aromatherapy as something we’re pretty skeptical about, at least as far as its ability to provide remedies for medical problems. Fortunately, we also said that one has to keep an open mind about such things, as long as the evidence doesn’t indicate otherwise. As it turns out, after the main text had already gone to press, we discovered an account in Consumer Reports, a magazine in which we have some confidence, that sniffing various scents can have salubrious effects: weight loss, overcoming anxiety, and sexual arousal seem to be affected positively by various scents. Live, as they say, and learn. Answers to Text Exercises Exercise 4-1 1. Bad lighting, noise, the speed at which events take place, bad weather 2. Being tired, distracted, emotionally upset 3. Credibility of the claim's content and of its source 4. Our own observations our background knowledge 5. Our own firsthand observations 6. Our memory Exercise 4-2 ▲Something like number 9 is probably true, given the huge, almost unimaginable difference in wealth between the richest and the poorest people on the planet, but we have no idea what the actual numbers are. We’ve seen number 12 going around the web, but we don’t know whether there’s anything to it, and we’re not interested in conducting the appropriate experiments. Click and Clack, the car guys on "Car Talk" on NPR, have said there might be something to this, under just the right circumstances. They won't try it either. We think the rest of these items don’t have much of a chance. 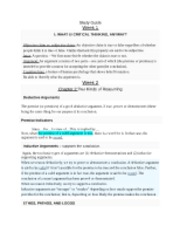 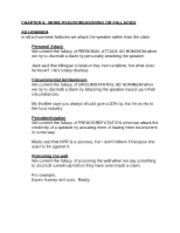 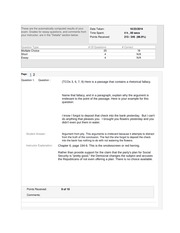 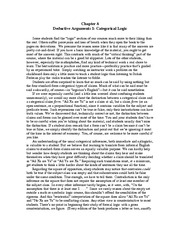