There is more because analyzing what you read

there is more, because analyzing what you read involves interpreting and evaluat- ing the points of a discussion or argument as well as its presentation-that is, its language and structure. Ultimately, analyzing an essay after establishing its gist will help you understand what may not be evident at first. A closer examination of the author's words takes you beneath the surface and sharpens your understanding of the issue at hand. Although there is no set procedure for analyzing a piece of prose, here are some specific questions you should raise when reading an essay, especially one that is trying to sway you to its view: • What kind of audience is the author addressing? • What are the author's assumptions about his audience? • What are the author's purposes and intentions? • How well does the author accomplish those purposes? • How convincing is the evidence presented? Is it sufficient and specific? Relevant? Reliable? Current? Slanted? • How good are the sources of the evidence used? Were they based. on personal experience, scientific data, or outside authorities? • Does the author address opposing views on the issue? • Is the author persuasive in his or her perspective?

18 • Introduction: Thinking a nd Reading Critically What Kind of Audience Is Being Addressed? Before the first word is written, a good writer considers the makeup of his or her audience- that is, its age group, gender, ethnic and racial makeup, educational background, and socioeconomic status. Also considered are the values, prejudices, and assumptions of the readers, as well as their political and religious persuasions. Some writers, including several in this book, write for a target audience-readers who share the same interest s, opinions, and prejudices. For example, many of the essays in Chapter 9, "Political Wordplay," were written for people familiar with current events and issues. Other writers write for a general audience. Although general audiences consist of very different people with diversified backgrounds, expectations, and standards, think of them as the people who read Time, News- week, and your local newspaper; that is, people whose average age is 35, whose educational level is high school plus two years of college, who make up the vast middle class of America, who politically stand in the middle of the road, and whose racial and ethnic origins span the world. You can assume they are generally informed about what is going on in the country, that they have a good comprehen- sion of language and a sense of humor, and that they are willing to listen to new ideas. Kenan Malik's essay appeared in Prospect, a publication with a reputation as a highly intellectual magazine of current affairs and cultural debate. The publication describes its readership as mature, educated, affluent, and discerning. Many of the readers are professionally accomplished and intellectually curious. A closer look at Malik's essay tells us more: • The language sounds like the essay is written for an educated audience with, most likely, a college education. 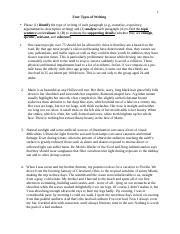 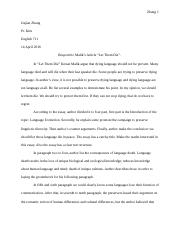 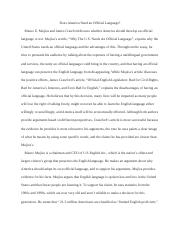 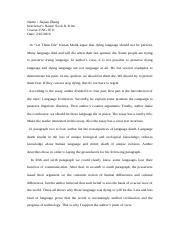 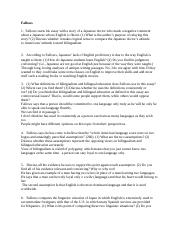