Or to do acts characteristic of the office of trustee

or to do acts characteristic of the office of trustee, he may thereby make himself what is called in law a trustee of his own wrong – i.e., a trustee de son tort, or, as it is also termed, a constructive trustee.” – Mara v Browne [1896] 1 Ch 199, 209 (CA) ›“… „trustee de son tort ; that is to say, a person who, ‟ though not appointed to be a trustee, nevertheless takes it upon himself to act as such and to discharge the duties of a trustee on behalf of others. In Taylor v Davies [1920] AC 636, 651, Viscount Cave described such persons as follows: „though not originally trustees, [they] had taken upon themselves the custody and administration of property on behalf of others; and though sometimes referred to as constructive trustees, they were, in fact, actual trustees, though not so named. ‟ Substituting dog Latin for bastard French, we would do better today to describe such persons as de facto trustees. In their relations with the beneficiaries they are treated in every respect as if they had been duly appointed. They are true trustees and are fully subject to fiduciary obligations.” – Dubai Aluminium Co Ltd v Salaam [2002] UKHL 48 at [138], [2003] 2 AC 366 Acting inconsistently Beneficiary - Trustee - agent (solicitor: doing something for T) When agent did something wrong, Bene can’t sue agent directly but through T Bene not involved in the relationship between T & A, Bene doesn’t have a standing to sue. But if Agent acted inconsistently as per their duty, Bene can sue them directly. ›“It is well established by many decisions, that a mere agent of trustees is answerable only to his principal and not to cestuis que trust in respect of trust moneys coming to his hands merely in his character of agent. But it is also not less clearly established that a person who receives into his hands trust moneys, and who deals with them in a manner inconsistent with the performance of trusts of which he is cognizant(aware), is personally liable for the consequences which may ensue upon his so dealing.” – Lee v Sankey (1873) LR 15 Eq 204 In Lee v Sankey, There were 2 Ts. Ts were sold property and give it to Solicitor and Solicitor then gave one part of property to one of Ts (the T wasted property $ then died insolvent). Because solicitor didn’t give the sold property to the two Ts and dissipated other part of sold property(these are all acting inconsistent), bene successfully sued the solicitor who were acting inconsistently as per his knowledge of his duty. Even they are not agent, just innocent volunteer, if they didn’t know of trust, they are not liable but if they became to know of it, as soon as they know, they are liable. It doesn’t have to be a precise terms just simple basic knowledge of trust. T A (innocent volunteer) B can sue A directly for Inno Vlr’s liability

Knowing inducement ›Eaves v Hickson (1861) 30 Beav 136 (54 ER 840) Fact : Trustee transfer property to two sons based on the will, but the sons was illegitimate (born out of wedlock). This case Trustee and William (who produced the forged marriage certificate) were sued of knowing inducement. It will be no matter: 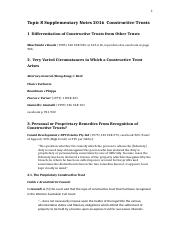 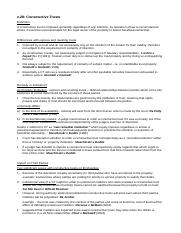 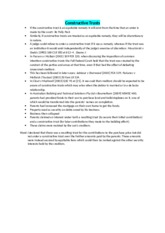 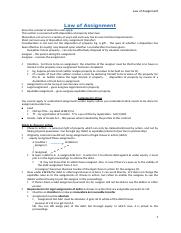 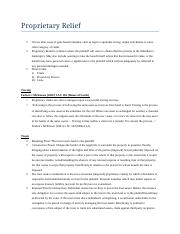