With the polytron and rotor stator homogenizer the

With the Polytron and rotor-stator homogenizer, the sample is drawn into a shaft with rotating blades Most plant and animal tissues, blood, cultured cells, bacteria, yeast Used for nucleic acid and protein isolation. Manual grinding with mortar and pestle Cell walls disrupted by mechanical force For nucleic acid isolation, samples are often ground in liquid N 2 Solid tissues. Common method to disrupt plant cells. Sample sources Somatic (body) fluids Whole blood, serum, plasma, CSF, ascites, semen, saliva, amniotic fluid, and lymph are all examples of somatic fluids. Lysis buffer is typically added directly to cell-free somatic fluids. For whole blood samples, lysis is often a two-step process. First, RBC are selectively lysed and WBC collected. The WBC are resuspended in lysis buffer. Small blood volumes (up to 200 μl) can sometimes be lysed directly (i.e., RBC and WBC are lysed simultaneously). Viruses Viral nucleic acids may be obtained from a variety of virus-infected samples but are frequently prepared from cell-free somatic (body) fluids. Lysis buffer with guanidinium is typically added directly to cell-free fluids; Proteinase K may also be required to lyse some viruses. Infected tissues must first be disrupted before isolating viral nucleic acids. Viral nucleic acids may also be obtained from samples archived on Whatman FTA cards or from buccal swabs. Cultured mammalian cells Cultured mammalian cells are normally easy to disrupt. Those grown in suspension are typically harvested by centrifugation, washed, and resuspended in an appropriate lysis buffer containing relevant denaturants, inhibitors, stabilizers, and so on. Vortexing will generally complete lysis. Adherent cells can be lysed directly on the culture plate, by adding lysis buffer and scraping the cells followed by transfer of the lysate to a tube and vortexing it to complete the disruption of the cells. Alternatively, adherent cells can be scraped into a tube containing the lysis buffer, mixed, and vortexed. Animal tissue Most animal tissue can be processed fresh. The complete disruption and homogenization of animal tissue is critical for good yields and representation of target molecules. Some tissues present special challenges, depending on the biomolecule being sought (i.e., DNA, RNA, or protein). For example, skeletal and cardiac muscle tissue, as well as kidney tissue, are especially difficult to disrupt. Liver and spleen are very active organs transcriptionally, so tissue samples derived from these organs have a very high protein and RNA content and thus, depending on the target molecule, may benefit from inclusion of appropriate inhibitors. Depending on the disruption method, the viscosity of the lysed sample may need to be reduced further for optimal results. Animal tissue that has been frozen after collection will generally benefit from disruption by different methods than those used for fresh tissue. For example, grinding in liquid nitrogen Continued from previous page

28-9624-00 AA 17 with a mortar and pestle is effective for most frozen tissue. In general, grinding should be 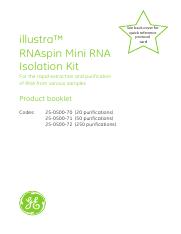 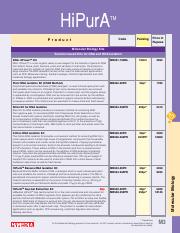 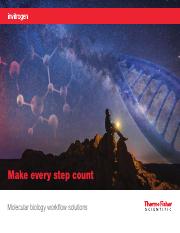 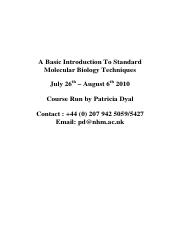 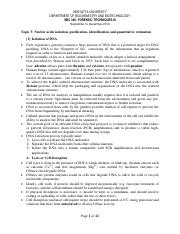