1999 the power shifts in the knowledge society

, 1999), the power shifts in the knowledge society,peoples’ low tolerance for change, corporate responsibility, increasing demand for theknowledge worker, outmoded managerial activities, the importance managerial careermobility, knowledge-based organizations of the future, and management creativity andinnovation (Rosenfeld and Wilson, 1999). Between 1965 and 1999 it is rare to find anysort of in-depth discussion of Drucker’s ideas and their value to, or impact on, themanagement discipline.There is a certain irony in the fact that our findings show Drucker (1954) to be themost cited management thinker in the management textbook, as he himself rarely citedothers within his own work. Drucker trusted that his readers would be “moreconcerned with what is right than with who is right and, accordingly, are neitherassuaged by appeal to authority nor alarmed by its absence” (pviii). Beatty (1998)commented on reviewers’ complaints about the dearth of footnotes in Drucker’s workand wondered how Drucker knew everything that he wrote. In Beatty’s opinion, therare occasions when Drucker provided footnotes, the references are enough to shrivelskepticism about the legitimacy of Drucker’s work. With his lack of supportingJMH15,4394
references and no scholarly empirical research afterConcept of the Corporation(1946),Drucker’s body of work has stood outside the growing scientific academic discourse.According to Beatty (1998), university professors said that they do not assignDrucker’s readings in their classes because Drucker based his works on his own ideas,not on empirical research. Nonetheless, and somewhat paradoxically, many textbookauthors cited Drucker in support of their own scientific work. The process oflegitimization occurs through various rhetorical devices (reference here please unlessyou meant the process of legitimization of Drucker occurs through various rhetoricaldevices), with Drucker being referred to as a “top management scholar” (Greenberget al., 2000), a “management guru” (Stone and Meltz, 1993), a “noted managementthinker” (Greenlaw and Biggs, 1979), and “an outstanding contemporary spokesman inthe management field” (Wheeler, 1962, p. 210). Unreferenced quotes from his work areincluded, often with a simple “Drucker says”, as if his name requires no introductionand is enough to give legitimacy to what is being said (do you need an example here?).Drucker, who thought that the ideas were more important than the person who hadthem, is present in the management textbook not through those very ideas thatmanagers deem so incredibly crucial to their effectiveness, but through his name as asource of authority and legitimacy.Management theory, philosophy, and the textbookIn an attempt to make sense of Drucker’s presence in the management textbooks, wereviewed events in the development of management theory and textbook productionover time. It is through these events, and their impact on the structure and content ofthe management textbook, that we can begin to understand the influence of thesocio-politicalcontextonDrucker’s(andothertheorists)presenceinbusiness 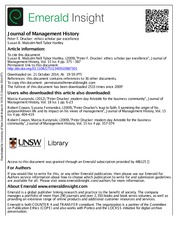 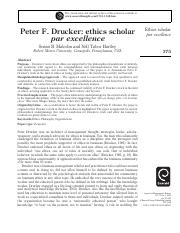 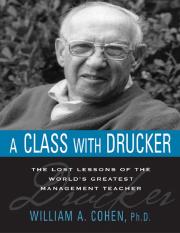 William A. Cohen Ph.D. -A Class with Drucker_ The Lost Lessons of the World's Greatest Management Te 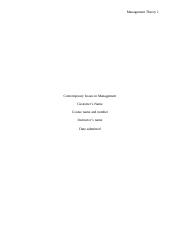 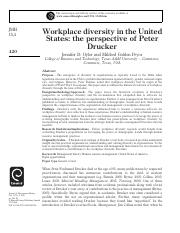 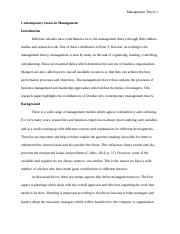