Rohingya Crisis in IR lens The Rohingya crisis is an issue in the lens of international relations as it affects the livesof human that are being targeted and killed due to discrimination of religion. According toArticle 2 of the Universal Declaration of Human Rights, “everyone is entitled to all the rightsand freedoms...without distinction of any kind, such as race, color, sex, language, religion,political or other opinion, national or social origin, property, birth or other status” (UDHR,1948). The Constitution of Myanmar prohibit abuse based on religion and race as they sit backand ignore the violence against Rohingya Muslims. Under IR, there are certain norms under which each state has the right to rule their stateunder. These norms include the right to closed borders, non-interference in their internal andexternal affairs from other states, and state sovereignty. State sovereignty is a state’s right to dowhatever they please within their own territory, (Pevehouse & Goldstein, 2017). However, theResponsibility to Protect doctrine (R2P) also outlines the fact that if a state fails to protect itscitizens from harm caused within (civilian conflict) or from the government, the internationalcommunity has the right and responsibility to intervene in order to protect the citizens fromatrocities. Furthermore, under the Just Cause Threshold of the R2P, military intervention forhuman protection purposes is justified in two broad sets of circumstances, when there is a “largescale loss of life, actual or apprehended, with genocidal intent or not, which is the product eitherof deliberate state action, or state neglect or inability to act, or a failed state situation; or if thereis a large scale “ethnic cleansing,” actual or apprehended, whether carried out by killing, forcedexpulsion, acts of terror or rape,” (R2P doctrine). And so, regarding the circumstances ofMyanmar, intervention would be justified as there is an ethnic cleansing taking place and the
government refuses to acknowledge it. Therefore, when there are issues pertaining to the lives ofhumans that are being denied their basic human rights, that is when it becomes an internationalrelations issue. Levels of Analysis The global level describes how international system influences outcomes, beyond theinteraction between states (Pevehouse & Goldstein, 2017). Countries such as Bangladesh fearthat if Rohingya seek refuge in their country, there will be a greater security threat to theircitizens. However, the international community fears that if the Rohingya do not get a place tolive, they will continue to be killed. Furthermore, the interstate level includes the influence of the 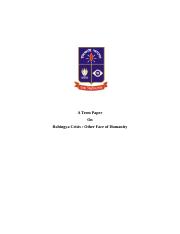 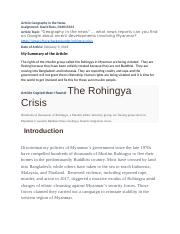 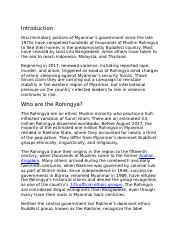 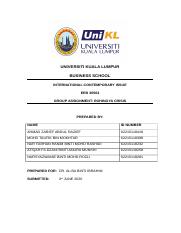 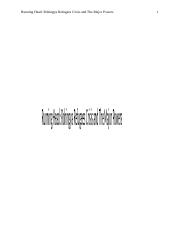