Recombination mechanisms which are determined by the

recombination mechanisms, which are determined by the electro-optical properties of the material (Moller, 1993). The first practical photovoltaic cells were developed in 1954 at Bell Laboratories (Chapin et al., 1954). The first solar cells developed were made of silicon, and were used primarily by the space industry for vehicle and satellite power supplies, beginning in 1958. The material properties and abundance of silicon made it a desirable choice for the manufacturing of solar cells. Silicon (Si) is a fairly cheap and plentiful element, found, for example, as quartz in sand. The properties of silicon that make it suitable for solar cells are that it is an excellent electrical and chemical insulator, has high electrical resistivity, has a relatively low saturation current density, and can absorb a large portion of the solar spectrum. In 1997, 98 percent of photovoltaic modules produced were made of silicon (Mazer, 1997). Amorphous silicon was first used for PV cells in 1976. Development of thin film silicon cells began in the late 1970s. Silicon-based concentrator cells were first used in space, but have recently been adapted for terrestrial applications. Thin- film cells, such as the cadmium telluride (CdTe) cell, were commercially produced in 2001, but the PV cell market is still dominated by silicon-based cells. A typical photovoltaic installation consists of several small, individual generating units or cells connected together in a grid. The individual cells are linked to form larger modules (Figure 2-1). These photovoltaic cells are generally composed of a front metal contact, semiconductor material, rear metal contact, and wires to transfer electrical loads. The actual conversion of sunlight into electricity takes place when photons are absorbed by the semiconductor material in the part of a photovoltaic cell called the pn-junction (positive/negative-diode) structure. These regions have either a deficiency of electrons, forming a positive region (p), or a surplus of electrons, forming a negative region (n), as shown in Figure 2-2. The electrons released when the energy of the photon is transferred form an electric current, which can then flow to an external load. Boron is typically added during silica crystal growth to produce the “p” region. Phosphorus is added to the silica wafer by allowing seepage of a phosphorus solution into a heated silicon wafer to form the “n” region (Green, 2000). Metal particles in a paste are then added to form the top and bottom contact layers. A surface, anti-reflection coating is sometimes added to the top contact. 2-1

Overview of the Photovoltaic Industry The generic pn-junction in a solar cell is a monolithic structure with two active layers: a thin, heavily doped top layer or emitter, and a thick, moderately doped bottom layer or base (Mazer, 1997). Figure 2-3 shows a cross section of a pn-junction in a crystalline silicon solar cell. When 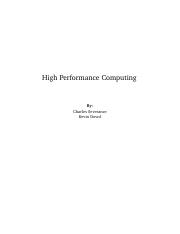 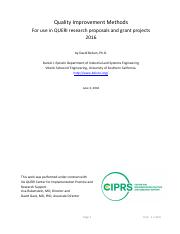 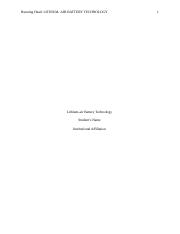 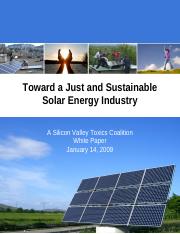 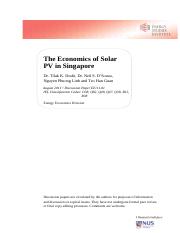