Jim speaks of his plan to save up to buy his wife, and then his children, out of slavery; and he adds that if the children cannot be bought he will arrange to steal them. Huck is horrified:Thinks I, this is what comes of my not thinking. Here was this nigger which I had as good as helped to run away, coming right out flat-footed and saying he would steal his children—children that belonged to a man I didn’t even know; a man that hadn’t ever done me no harm.

I was sorry to hear Jim say that, it was such a lowering of him. My conscience got to stirring me up hotter than ever, until at last I says to it: “Let up on me—it ain’t too late, yet—I’ll paddle ashore at first light, and tell.” I felt easy, and happy, and light as a feather, right off. All my troubles was gone.This is bad morality all right. In his earliest years Huck wasn’t taught any principles, and the only ones he has encountered since then are those of rural Missouri, in which slaveowning is justone kind of ownership and is not subject to critical pressure. It hasn’t occurred to Huck to question those principles. So the action, to us abhorrent, of turning Jim in to the authorities presents itself clearly to Huck as the right thing to do.For us, morality and sympathy would both dictate helping Jim to escape. If we felt any conflict, it would have both these on one side and something else on the other—greed for a reward, or fear of punishment. But Huck’s morality conflicts with his sympathy, that is, with his unargued, natural feeling for his friend. The conflict starts when Huck sets off in the canoe toward the shore, pretending that he is going to reconnoitre, but really planning to turn Jim in:As I shoved off, [Jim] says: “Pooty soon I’ll be a-shout’n for joy, en I’ll say, it’s all on accounts o’ Huck I’s a free man … Jim won’t ever forgit you, Huck; you’s de bes’ fren’ Jim’s ever had; en you’s de only fren’ old Jim’s got now.”I was paddling off, all in a sweat to tell on him; but when he says this, it seemed to kind of take the tuck all out of me. I went along slow then, and I warn’t right down certain whether I wasglad I started or whether I warn’t. When I was fifty yards off, Jim says:“Dah you goes, de ole true Huck; de on’y white genlman dat ever kep’ his promise to ole Jim.”Well, I just felt sick. But I says. I gotto do it—I can’t get outof it.In the upshot, sympathy wins over morality. Huck hasn’t the strength of will to do what he sincerely thinks he ought to do. Two men hunting for runaway slaves ask him whether the man on his raft is black or white:I didn’t answer up prompt, I tried to, but the words wouldn’t come. I tried, for a second or two, tobrace up and out with it, but I warn’t man enough—hadn’t the spunk of a rabbit. I see I was weakening; so I just give up trying, and up and says: “He’s white.”So Huck enables Jim to escape, thus acting weakly and wickedly—he thinks. In this conflict between sympathy and morality, sympathy wins. 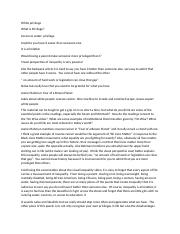 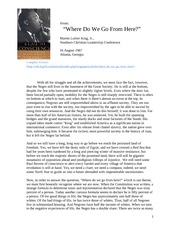 Martin Luther King, Jr. - Where Do We Go From Here 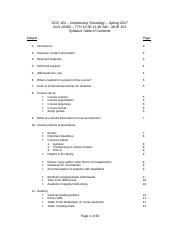 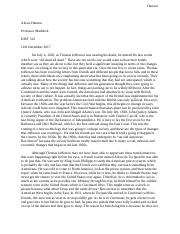 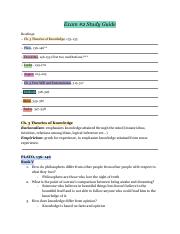 PHILOSOPHY Study Guide for me _)).pdf 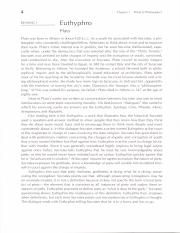