Type 1 diabetes mellitus typically occurs in people who are under 40 years of age, with 40% developing it before 20 years of age. It may happen at any age. Type 1 diabetes is the result of a long-standing process in which the body’s T cells attack and destroy pancreatic cells, which are the source of the body’s insulin. Because the initial manifestation of type 1 diabetes is rapid, the symptoms are usually acute. Type 2 DM represents more than 90% of patients with diabetes. In Type 2 DM, the pancreas, for the most part, keeps on producing some insulin. Though, the insulin that produced is either lacking for the necessities of the body as well as is ineffectively utilized by the tissues. The most critical risk factor for developing type 2 diabetes is believed to be obesity, specifically abdominal and visceral adiposity Diabetes Insipidus Diabetes Insipidus (DI) “is a syndrome of polyuria resulting from the inability to concentrate urine, the inability to conserve water because of a lack of vasopressin action” (Hammer & McPhee, 2014, p. 562). These will result in large quantities of dilute urine and dehydration. There are two types, central and nephrogenic. In central diabetes, there is damage to the hypothalamus or the supraoptic-hypophysial tract, or more commonly there is an injury from infarct, head trauma, tumor, or postsurgical which causes a cessation of vasopressin secretion. These can be temporary or permeant depending on the cause. With nephrogenic DI, the kidney is unable to “respond to the circulating vasopressin by retaining water” (Hammer & McPhee, 2014, p.562). The kidney is the mechanism that regulates the volume of water in the plasma by producing less urine to conserve water when the body is approaching dehydration and remove extra water when the body is under hydration, and the fluid excretion is controlled by antidiuretic hormone (ADH). Excessive excretion of ADH from the posterior pituitary gland, a patient cannot excrete diluted urine, dilutional hyponatremia. Polyuria considered when an adult urinates more 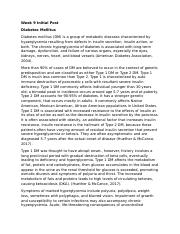 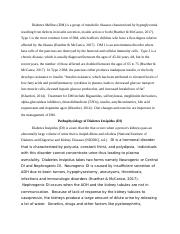 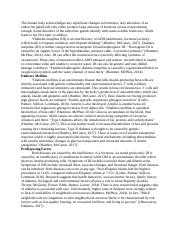 The human body acknowledges any significant changes in hormones.docx 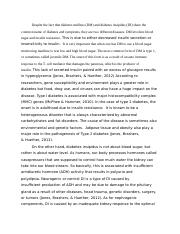 Despite the fact that diabetes mellitus.docx 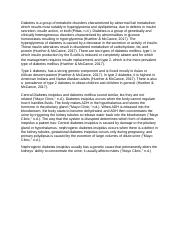 Diabetes is a group of metabolic disorders characterized by abnormal fuel metabolis1.docx 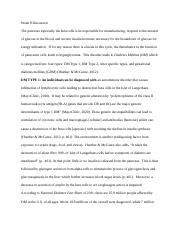