Departmentalization e employee empowerment this is

departmentalizationE.employee empowermentThis is the definition of departmentalization.Points Earned:1/1Correct Answer:DYour Response:D 30. Yahoo!Welcome to Yahoo!, where you’ll find a $100 million loss, plummeting advertising sales, a stock price that has fallen from an all-time high of $237 to less than $10 per share, and layoffs that cost 800 people—including the previous CEO—their jobs. At this once-phenomenally-successful company, so many basic things have gone wrong that the question is: Where do you start to fix it?One key problem is the organizational structure: with just 3,200 employees, Yahoo! has fourty-four different business units! Even General Electric, with 300,000 employees, has only 13. You think to yourself, “This is unmanageable. Too many people and no focus.” Amazingly, despite
having 44 business units, Yahoo! doesn’t have a direct sales unit. No one, it turns out, is responsible for cultivating customers. Why not? Well, during the “go-go” days, customers were literally throwing themselves and their advertising dollars at the company. As one Yahoo! manager said, “The fish were jumping into the boat.” Consequently, most orders took place via email. Yahoo! didn’t have to establish relationships with customers because customers came to it. Unfortunately, this led to arrogance. Jeff Bell, a vice president at one of Yahoo!’s potential customers, DaimlerChrysler, said the message was, “Buy our stuff [meaning Yahoo!’s advertising], and shut up.” Jeff Mallett, Yahoo!’s former president, said, “We ran Yahoo! to optimize market share. I make no apologies for that. If there was a company that didn’t get it [Internet advertising], we moved on very quickly.”Another problem was the overly creative, freewheeling, spontaneous company culture in which everyone, including the CEO, worked in cubicles. The problem wasn’t so much the cubicles, but what they came to represent: an overly informal culture with no controls. At Yahoo!, employees played soccer in a large open space outside the company boardroom, even while the board was meeting. Furthermore, no one had an overall perspective of what was best for the entire company. Consequently, said one Yahoo! vice president, “[Unit] managers would beg, borrow, and steal from the network [meaning the overall company] to help their own properties.” Plus, if you had an idea, you pursued it without having to get anyone’s feedback or approval. Yahoo!’s chief operating officer said, “Yahoo!’s original mission was to grow as fast as you can and put things out there and see what works.” The more serious problem, he said, was that “nobody knew what would work.”The most amazing aspect of this culture was that, as one manager explained, “There was a fair amount of resistance toward the strategy of monetizing our businesses.” In other words, the culture at Yahoo! was so informal, so unfocused, and so freewheeling that no one really worried about whether the company could charge for the services it provided and make a profit. “There was a fear,” said this manager, “that if all of our efforts were put into profit making, we’d starve research and development and lose our innovation.”Refer to Yahoo!. What is one of the advantages of Yahoo's new organizational structure? A.elimination of the constraints associated with the chain of commandB.a flatter structure better able to respond to a static environmentC.elimination of resource duplicationD.the ease with which cross-departmental cooperation can be achievedE.the ease with which top managers can assess work-unit performance
One of the advantages of product departmentalization cited in the text is the ease with which top managers can access work-unit performance.Points Earned:0/1Correct Answer:EYour Response:A 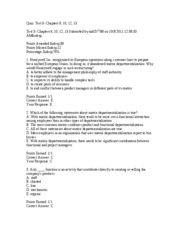 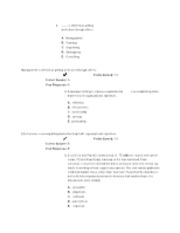 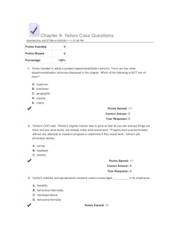 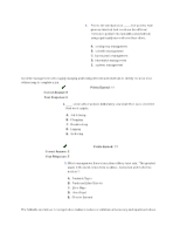 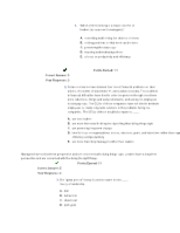 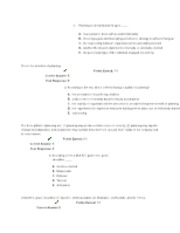