However meta analytic results do show that girls

measure. However, meta-analytic results do show that girls score higher on effortful control than boys (Else-Quest, Hyde, Goldsmith, & Van Hulle, 2006). On balance then, we could expect procrastination to be weakly associated with males. Year As previously mentioned, Kachgal et al. (2001) believe that procrastination is on the rise. This would be consistent with the increase in other forms of self-regulatory failure (e.g., obesity, gambling, excessive debt) over the last 25 years (Griffith & Parke, 2002; Sivy, 2000; Wadden, Brownell, & Foster, 2002). Since cohort effects in personality do appear to exist (e.g., Roberts, Walton, & Viehtbauer, 2006) and since procrastination may be susceptible to environmental influences (e.g., task aversiveness), such an increase is a definite possibility. However, although self-reports provide the best available data for studying the historical prevalence of procrastination, it is always possible that any observed trend represents changes in cultural response sets (e.g., a greater willingness to admit procrastination) rather than reflecting a true change in underlying behavior. Temporal Motivation Theory As van Eerde (2003) concluded in her review, “A more comprehensive theoretical framework of procrastination is still needed” (p. 1412). One promising candidate is Temporal
The Nature of Procrastination 24 Motivation Theory (Steel & König, in press), a synthesis of traditional, well-established motivational formulations that include time as a fundamental term. An integration of this type has been proposed by several authors (Loewenstein & Prelec, 1992; Rachlin, 1990; Schouwenburg & Groenewoud, 1997), including Akerlof (1991), the Nobel Prize winning economist. This synthesis addresses a major problem in psychology, as Staats (1999) concludes: “The task that will not go away and that, until faced, will sentence psychology to the ranks of „would-be science‟ –is that of unification, of weaving threads together” (p. 8). Similarly, as Zeinder, Boekaerts, and Pintrich (2000) indicate specifically for the self-regulatory literature, “The fragmentation and disparate, but overlapping, lines of research within the self-regulation domain have made any attempt at furthering our knowledge an arduous task” (p. 753).4Elements of Temporal Motivation Theory are derived primarily from expectancy theory and hyperbolic discounting, although it can be applied to need theory, prospect theory, psychobiology, and goal setting theory. Its simplest formulation is: iiiiEVUtilityDUtility refers to how desirable a task or choice is. By definition, we pursue whatever behavior has the highest utility. As the numerator of the equation indicates, activities that are high in Expectancy (E) and Value (V) should be more desirable. The denominator of the equation captures the element of time. Enjoyable activities that are immediately realizable (D), that have a short delay, should be more highly valued. As delay becomes large, utility necessarily shrinks.

Learn more about The American and Orlando with Course Hero's FREE study guides and infographics! 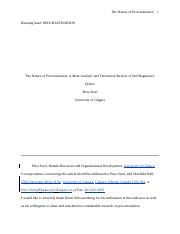 The Nature of Procrastination 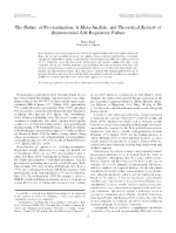 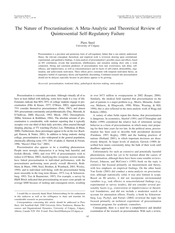 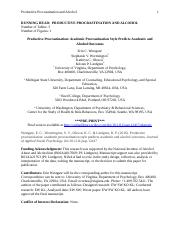 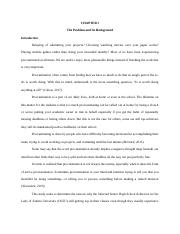