Vicksburg did not celebrate independence day 4th of

besieged town during the siege involve extreme hunger and lack of sanitation... Vicksburg did not celebrate Independence Day (4th of July) for nearly 80 years (~1960) as a result ● 7/1 (PA): Battle of Gettysburg : simultaneous with the surrender at Vicksburg came the dramatic, decisive, bloody Union victory at Gettysburg, Lee’s furthest penetration northwards… his defeat prevented European recognition of the Confederacy and prevented the Congress (and Lincoln ) from considering a negotiated end to hostilities that might have left the CSA an independent nation... engagements during the battle seared into American lore included the Devil’s Den, Pickett’s Charge, Cemetery Ridge, and the Peach Orchard... 51K dead and wounded, both sides ● 9/19 (GA): Battle of Chickamauga: the most significant Confederate victory in the West saw Bragg’s army defeat Rosencrans’s Army of the Cumberland... the Union was repelled from Northern Georgia... <4K dead, >50% Confederate This timeline is meant to provide training for students of American history. It should not be cited as an academic source. Notify [email protected] with any errors or uncited quotations.

ADVANCED AMERICAN HISTORY TIMELINE 1801-1889... LAST UPDATE Tuesday, June 21, 2016... by J. A. Stanford, Jr., PAGE 81 1863 New York draft riots Spring: after the Union followed the Confederacy’s lead and issued a wartime draft, riots broke out among NYC’s Irish immigrant population, who as victims of nativism themselves resented having to fight for the rights of blacks... they rioted and lynched many free African Americans 1863 Vicksburg 5/18-7/4 (MS): see AMERICAN CIVIL WAR IN 1863 above 1863 West Virginia 6/20: seceded from Confederate VA to become a Union state... as early as 10/24/61 96% of voters (34% turnout) approved the push for Union statehood; the inclusion of 24 secessionist counties in the new state resulted in a guerilla warfare against 40K federal troops 1863 Gettysburg 7/1-3 (PA): see AMERICAN CIVIL WAR IN 1863 above 1863 Lincoln’s Gettysburg Address 7/4 (PA): “Four score and seven years ago our fathers brought forth on this continent, a new nation, conceived in Liberty, and dedicated to the proposition that all men are created equal. Now we are engaged in a great civil war, testing whether that nation, or any nation so conceived and so dedicated, can long endure. We are met on a great battlefield of that war. We have come to dedicate a portion of that field, as a final resting place for those who here gave their lives that that nation might live. It is altogether fitting and proper that we should do this. But, in a larger sense, we cannot dedicate—we cannot consecrate—we cannot hallow—this ground. The brave men, living and dead, who struggled here, have consecrated it, far above our poor power to add or detract. The world will little note, nor long remember what we say here, but it can never forget what they did here. It is for us the living, rather, to be dedicated here to the unfinished work which they who fought here have thus far so nobly advanced. It is rather for us to be here dedicated to the great task remaining before us—that from these honored dead we take increased devotion to that 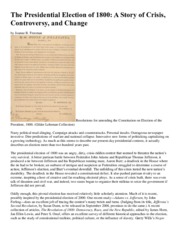 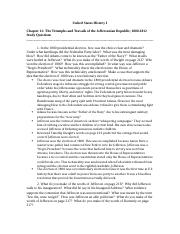 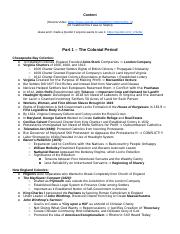 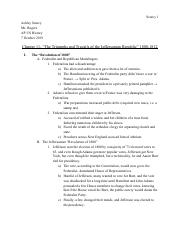 apush chpt 11 outline %22triumphs and travails of the jeffersonian republic%22.pdf 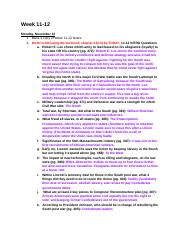