Finally to link the theme to humans and show the

numbers of chambers as his son was born with three chambers instead of four. Finally, to link the theme to humans and show the indifference in the number of chambers, Doyle says, “We all churn inside.” Now, he has lured us into reality, where he will define a life’s experience. He says, “So much held in a heart in a lifetime. So much held in a heart in a day, an hour, a moment. We are utterly open with no one in the end—not mother and father, not wife or husband, not lover, not child, not friend.” Doyle starts off the reach into the delicacy of the heart, a metaphor for our soul and source of feel, by explaining the immense pressure put on it throughout time and asserting that there is no one to relieve this pressure from us. “All hearts finally are bruised and scarred, scored and torn, repaired by time and will, patched by force of character, yet fragile and rickety forevermore, no matter how ferocious the defense and how many bricks you bring to the wall.” He expressed that no matter how strong our guards are, we are delicate and grow even more fragile with time as we bruise and scar our hearts. In this last paragraph, Doyle made readers sync into his story by syncing into their deepest pain. He did this by saying, “A woman’s second glance, a child’s apple breath, the shatter of glass in the road, the words “I have something to tell you,” a cat with a broken spine dragging itself into the forest to die, the brush of your mother’s papery ancient hand in the thicket of your hair, the memory of your father’s voice early in the morning echoing from the kitchen where he is making pancakes for his children.” He showed us the weakness of these brick walls by reaching 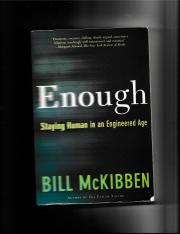 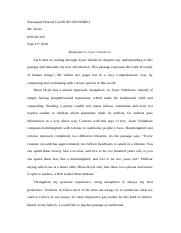 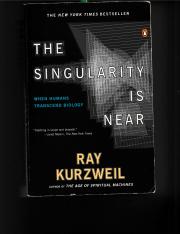 The Singularity is Near Chapter 1 (1).pdf 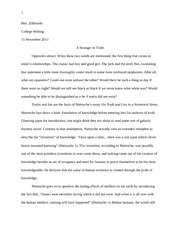 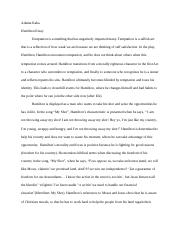 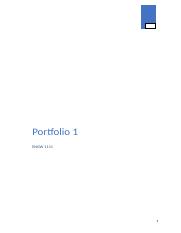 Anthropology of a Place. Portfolio #1