Additional function of the resin is to provide the

Additional function of the resin is to provide the composite with toughness, damage tolerance, and impact and abrasion resistance. Maximum usage temperature, resistance to moisture, thermal stability and sensibility to UV radiation of the composite is also determined by the matrix [1]. Stiffness and strength are an order of magnitude lower compared to those of fibres. Elastic modulus is in the range of 2-4 GPa, while the strength is approximately 20-80 MPa as can be seen from Table 4. Figure 6: Molecular chains of thermoset and thermoplastic resins [1] All polymer resins are composed of long chain-like molecules consisting of many simple repeating units [3]. Polymers are classified into two categories: thermoplastic or thermoset polymer resins CIE5128 - FRP Structures Reading 1.1 - Fibres, resins and cores M. Pavlovic, F. Csillag September 2018 © All Rights Reserved4
according to the effect of heat on their properties. Thermoplastic polymer resin softens every time it is heated, while thermoset permanently sets after curing, and cannot be softened or re-formed by heating. The thermoset monomers are converted into an infusible three-dimensional, rigid crosslinked structures during the polymerisation process (Figure 6). Additional crosslinks are established by further heating, leading to a fully cured resin; implying that thermosets are characterized by a longer processing time than their thermoplastic counterparts, which lack crosslinks. Although, since thermoplastics have inherently high viscosity and high melting points, high temperatures and pressures are normally required for processing. Thermoplastics do not form crosslinks, their main chains are held together by relatively weak secondary bonds [1]. As a consequence, thermoplastics are recyclable, reparable and impact resistant than untoughened thermosets, but they are very much prone to creep and exhibits very low fire resistance, which impede widespread structural applications. Typical thermoplastics include nylon, polypropylene and ABS; they are usually reinforced by short, chopped fibres [3]. Once cured, thermosets will not melt again if heated, although above a certain temperature their mechanical properties will worsen considerably, due to the transition of the resin from a ‘glassy’ state to a ‘rubbery’ state. This temperature is referred as the Glass Transition Temperature (Tg), and varies depending on the type of resin, its degree of cure and whether it was mixed correctly [4]. Above the Tgmost properties as resin stiffness, compressive and shear strength, water resistance drop sharply. Since mostly thermoset resins are used in civil engineering, these will be covered hereinafter. Unsaturated polyesters (UP)are most widely used in commercial FRP applications. They are relatively inexpensive with excellent workability. Additionally, UP shows low moisture absorption, which makes it applicable to external application. Nevertheless, polyesters generally have lower mechanical properties due to modest adhesive properties, very brittle behaviour, inferior environmental resistance and they show high rate of shrinkage during curing [1]. 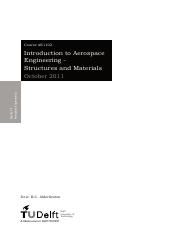 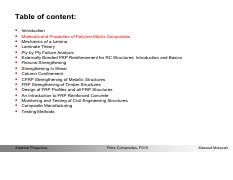 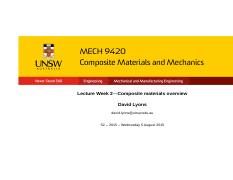 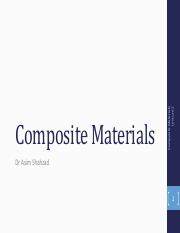 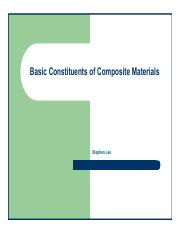