We also searched the reference sections of the

programs. We also searched the reference sections of the articles from past teamwork training review papers as well as from articles that initially met inclusion criteria to determine if any additional articles could be retrieved. The searches were conducted in September 2015 and no time limits were placed on

the search strategy. Each article was first subjected to title elimination, then abstract elimination, and finally full-text elimination. Eligibility Criteria To be included in the meta-analysis, a study needed to examine the effects of teamwork training by comparing teams in an experimental condition (i.e., those who received teamwork training) with those in a control condition (i.e., where teams did not receive teamwork training). Cross-sectional/non- experimental studies were excluded, as were intervention studies that did not include a control condition. As this review was only concerned with teamwork interventions, studies that focused on training taskwork—whether independent of, or in addition to, a teamwork intervention—were excluded. For example, as previously mentioned, simulation-based training (SBT) has been used as a means of training individuals to perform technical skills and also to enhance teamwork. In order for a SBT intervention to be included in this meta-analysis, it had to be clear that only teamwork (not technical skills) was being targeted during training. In order to address our primary research question, the study had to provide data on at least one teamwork dimension and/or team performance. The study also needed to provide sufficient statistics to compute an effect size. In cases of insufficient data, corresponding authors were contacted for this information. The articles were delimited to those published in the English language. Data Analysis Articles that met the aforementioned eligibility criteria were extracted for effect sizes and coded independently with respect to seven moderators by two of the authors (DM and GR). Interrater reliability for the coding of these moderators was over 90%, kappa (SE) = 0.80 (0.01). The moderators examined were based on a scoping review (the purpose of which included identifying pertinent characteristics that were commonly reported in previous teamwork intervention research), which was conducted in preparation for this systematic review. The moderators that were examined in this review included (1) the context within which an intervention was conducted ( health care , aviation , military , academia , industry , or laboratory experiment) , (2) the type of team targeted ( intact or new ), (3) the primary training method applied to conduct the intervention ( didactic education , workshop , simulation , or team reviews ), (4) the dimension(s) of teamwork ( preparation , execution , reflection , and/or interpersonal dynamics ) targeted in the intervention as well as (5) the number of dimensions targeted (between one and four), (6) the type of measure used to derive effect sizes ( self-report , third party , or objective measures ), and—when teamwork was assessed as the criterion variable—(7) the specific 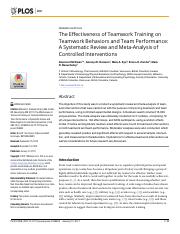 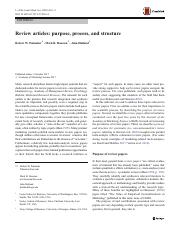 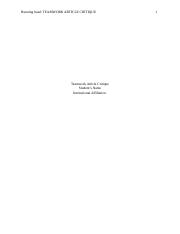 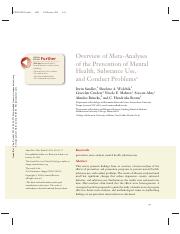 2006 Kozlowski & Ilgen Enhancing the effectiveness of work groups and teams.pdf 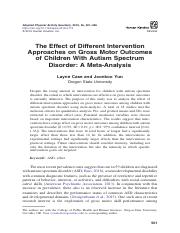