to coherent to followers (B. M. Bass et al., 1987; Metwally & El-bishbishy, 2014). Inspirational motivation dimension bring into line individual and organizational goals, thus making the achievement of organizational goals an attractive means of achieving personal goals (Seloane, 2010). Transformational leaders should, therefore, behave in such a way, which motivates and inspires followers (Das, 2017). 3.3 Intellectual Stimulation Transformational leaders stimulate their supporters‟ , efforts to be innovative and creative by questioning expectations, reframing difficulties, and imminent new idea. There is no public criticism of individual members‟ mistakes (Avolio & Bass, 1995; B. M. Bass, 2006). Intellectual stimulation essentially involves the leader stimulating the followers to think through issues and problems for themselves and thus to develop their own abilities (Kirkbride & Kirkbride, 2006). Intellectual stimulation is concerned with the role of leaders to challenge creativity and innovation among followers (Metwally & El-bishbishy, 2014). Followers are encouraged to try new approaches, and their ideas are not criticized because they differ from the leaders‟ ideas (B. M. Bass, 2006). Intellectual stimulation arguably forms part of empowerment and continuous improvement to followers or people (Reza, 2018; Seloane, 2010) . (B. M. Bass et al., 1987; Seltzer & Bass, 1990) stated that one of the most stimulating leaders was Socrates, although he was viewed as a troublemaker and as troublesome the status quo. 3.4 Individualized Consideration Transformational leaders give special attention to each individual f ollower‟s needs for achievem ent and growth by acting as a coach or mentor (Avolio & Bass, 1995; B. M. Bass, 2006). Individualized consideration is practiced when new learning opportunities are created along with a supportive climate (Avolio & Bass, 1995; B. M. Bass, 2006). Individualized consideration recognizes differences among people in their strengths and weaknesses, likes and Dislikes (Kirkbride & Kirkbride, 2006). Individualized consideration compresses with the transformational leadership behaviors of leaders who use this style of leadership show consideration for their followers‟ needs and are prepared to encourage the development of appropriate work place behavior (Kirkbride & Kirkbride, 2006; Sarros & Santora, 1995). It in terms of needs and desires are recognized. The leader‟s behavior establishes the recognition of

Volume: 5| Issue: 3 | March 2019 EPRA International Journal of Multidisciplinary Research (IJMR) | ISSN (Online): 2455 -3662 | SJIF Impact Factor: 5.148 122 individual differences (B. M. Bass, 2006). Appropriate transformational abilities of leaders which are assumptions for the use of leaders' skills and for successful performance of leader‟s jobs (Das, 2017). According to some researchers transformational leaders has carried on these following skills (B. M. 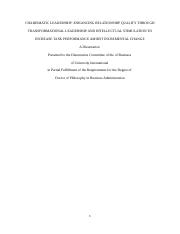 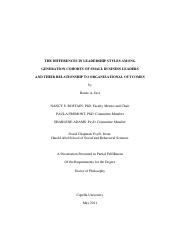 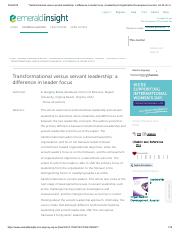 Transformational versus servant leadership_ a difference in leader focus....pdf 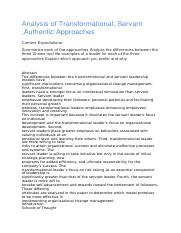 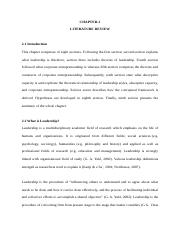