CHAIRMAN DE PEDRO: Isa-cite na lang ko ano iyong title o chapter o section, ha! HON. LINA: . . . Page 436, lines 13 to 14 delete within eighteen months prior to December 31, 1990, and in lieu thereof, insert from 1988 up to the effectivity of the Code. The rationale. . . . CHAIRMAN DE PEDRO: How should it be read? HON. LINA: It will read as follows: " Provided however , that the Local Government Units which have conducted elections for the Kabataang Barangay as provided for, in Batas Pambansa Bilang 337, up to the effectivity. . . ." CHAIRMAN DE PEDRO: So, any deletion from the word "within," ha, up to. . . . HON. LINA: Remove the words, the phrase, "within eighteen months prior to December 31, 1990, and insert from 1988 up to the effectivity of this Code." CHAIRMAN DE PEDRO: From? HON. LINA: From 1988 up to the effectivity of this Code. Kasi meron nang mga election, eh, na ginawa, eh. There are five thousand barangays, based on the record of the DILG, out of forty thousand, imaging that, na nag-conduct na ng election nila based on the KB Constitution and By-Laws, and they're sitting already, now if we do not recognize that, mag[ka]karoon sila ng question . CHAIRMAN DE PEDRO: Accepted, Mr. Chairman. Section §532(d) may thus be deemed to be a curative law. Curative laws, which in essence are retrospective in effect, are enacted to validate acts done which otherwise would be invalid under existing laws, by considering them as having complied with the existing laws. Such laws are recognized in this jurisdiction. 14 Fourth . It is finally contended that the exemption of the barangays of the City of Manila from the requirement to hold elections for SK officers on December 4, 1992 would deny the youth voters in those barangays of the equal protection of laws. Respondent claim that only in barangays in the City of Manila, which then numbered 897, were elections for SK not held in 1992 on the ground that between January 1, 1988 and January 1, 1992 there had already been SK elections held, when, according to petitioners' own evidence, during that period, SK elections had actually been conducted in 5,000 barangays. Whether this claim is true cannot be ascertained from the records of this case. Merely showing that there were 5,000 barangays which similarly held KB elections between January 1, 1988 and January 1, 1992 does not prove that despite that fact these same barangays were permitted to hold elections on December 4, 1992. For one thing, according to the Manila Bulletin issue of November 18, 1992 (p. 9), 568 barangays in the Province of Bulacan did not have SK elections on December 4, 1992 either, because they already had elections between January 1, 1988 and January 1, 1992. For another, even assuming that only barangays in Manila were not permitted to hold SK elections on December 4, 1992 while the rest of the 5,000 barangays were allowed even if KB elections had already been held there before, this fact does not give the youth voters in the 897 Manila barangays ground for complaint because what the other barangays did was contrary to law. There is no discrimination here.

Most Popular Documents for SLG 123 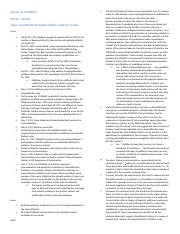 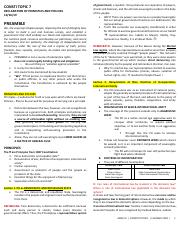 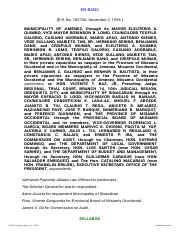 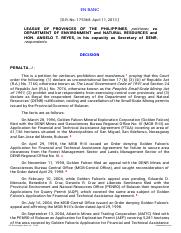 13. League of Provinces in the Philippines v DENR.pdf 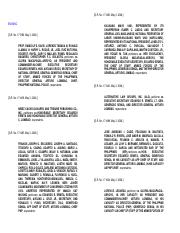