They know how to manage their emotions and use

Add Question HereQuestion 65Essay0 pointsModifyRemoveQuestionDescribe a young child’s language development from his or her use of crying to gain attention at one month to his or her use of telegraphic speech. AnswerAnswer will include that babies can cry from birth on, but at one month, they use crying to gain attention with parents being able to tell from the tone of crying whether the infant is hungry, angry, or in pain. Around six to eight weeks of age, babies begin cooing, which is the repetition of vowel sounds, such as “oo” and “ah.” By seven months, the child can babble. In the babbling stage, the consonants b, d, m, and g are combined with the vowel sounds to produce meaningless language sounds. At first, babbling is the same around the world. But soon, the language spoken by the parents has an influence. That is, Japanese babies babble Japanese sounds and French babies babble French sounds because these are the sounds that they hear and are reinforced by the parents for making. At about one year, children respond to real words, such as noor hi. Soon afterward, the first connection between words and objects forms, and children may address their parents as “Mama” and “Dada.” By age 18 months to two years, the child’s vocabulary may include from 24 to 200 words. At first, there is a single-word stage, during which children use one word at a time, such as “go,” “juice,” or “up.” Soon after, words are arranged in simple two-word sentences called telegraphic speech: “Want-Teddy,” and “Mama-gone.” Add Question HereQuestion 66Essay0 pointsModifyRemoveQuestionExplain how parents and teachers can utilize Vygotsky’s ideas to help children to become more skillful learners. AnswerAnswer will include that Vygotsky’s key insight is that children’s thinking develops through dialogues with more capable persons with this interaction being most helpful when they take place within a child’s zone of proximal development. Vygotsky realized that, at any given time, some tasks are just beyond a child’s reach. The child is close to having the mental skills needed to do the task, but it is a little too complex to be mastered alone. However, children working within this zone can make rapid progress if they receive sensitive guidance from a skilled partner using a process known as scaffolding. Vygotsky believed that adults help children learn how to think by scaffolding or supporting the children’s attempts to solve problems or discover principles. To be most effective, scaffolding must be responsive to a child’s needs. Add Question HereQuestion 67Essay0 pointsModifyRemoveQuestionSeveral elementary, junior high, and high school students are presented with a moral dilemma involving a young man whose best friend asks him to help him cheat on the upcoming history test. Using Kohlberg’s theory, explain the level each of the different age students would most likely be in and how each might respond to this dilemma. 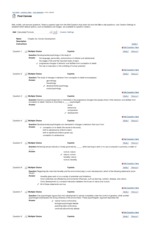 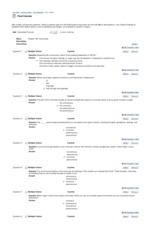 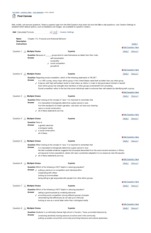 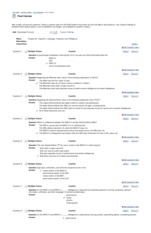 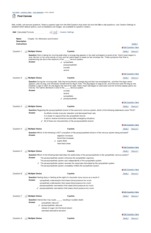