is that it can be updated every day that a new datum, associated to any of the regions under consideration, is published. These updates would help to reassess the weakness of a given econ- omy in global comparative terms. The entire sequence of maps for the period 2003:04-2020:02 is available online. 10 We are interested in providing a single statistic that summarizes the state of the global economy, and that additionally can be (i) updated in real-time, (ii) decomposed into its regional contributions, (iii) useful to quantify risks, and (iv) simple to interpret. Therefore, we proposed the Global Weakness Index (GWI) which consists on a weighted average between the probabil- ities of low activity associated to each of the K regions under consideration. Since the models are estimated in a Bayesian fashion, we are able to reproduce many replications associated to the realization of a low activity regime for each region, that is, s ( l ) κ,t , and for κ = 1 , ..., K , and l = 1 , ..., L , where K is the number of countries and L is the number of draws. L should be large enough to ensure convergence in the associated posterior density. Hence, the l -th replication of the GWI is given by, GWI ( l ) t = K X κ =1 ω κ,t s ( l ) κ,t , (8) where ω κ,t denotes the time-varying weights associated to each region based on its evolving economic size relative to the world GDP. The collection of all the replications { GWI ( l ) t } l = L l =1 constitutes the simulated density of the index at time t , from which point estimates along with any percentile, to measure its uncertainty, can be easily computed. Notice that, by construction, the GWI is bounded between zero and one. That is, the index would take the upper (lower) bound value of one (zero) when the probabilities of weak activity associated to all the regions under consideration are equal to one (zero), implying the highest (lowest) degree of global 10 It can be found at weakness . ECB Working Paper Series No 2381 / March 2020 18

weakness. In Chart A of Figure 4 , we plot the Global Weakness Index, along with the world GDP growth, for comparison purposes. 11 There are several important features. First, notice that the GWI starts to rapidly increase during 2008, reaching a value of 0.8 in October of the same year, indicating clear signs of a global contraction. Second, as the GWI increases during 2008, the corresponding credible set shrinks, indicating a high synchronization in a ‘bad’ state. 12 Third, the GWI anticipates the exit of the last global recession by dropping to values close to zero around July 2009. Fourth, the index also detects two episodes of moderate weakness for the world economy. The first one took place between the late 2015 and the early 2016, period of slower growth in emerging markets and gradual pickup in advanced economies, as characterized by the IMF. The second episode of moderate weakness is the present one. There is a moderate increase in weakness since 2018 that skyrockets with the information about coronavirus crisis, taking the index to its largest value since the beginning of the Great Recession, in the early 2008. 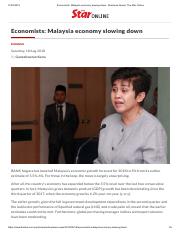 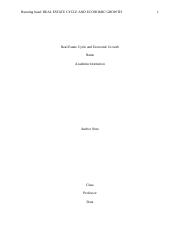 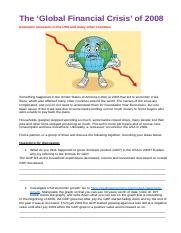 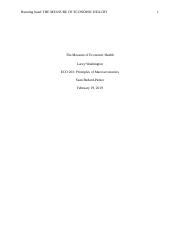 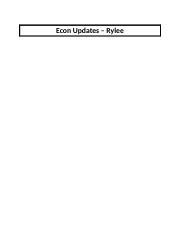