iv. Barnabus 1. 100 AD 2. may or may not have been Paul’s traveling companion 3. And further, my brethren: if the Lord endured to suffer for our soul, He being Lord of all the world, to whom God said at the foundation of the world, “Let us make man after our image, and after our likeness” v. Mathetes 1. As a king sends his son, who is also a king, so sent He Him, as God He sent Him; as to men He sent Him; as a Savior He sent Him 2. He formed in His mind a great and unspeakable conception, which He communicated to His Son alone 3. He was aware, then, of all things in His one mind, along with His Son, according to the relation subsisting between them vi. Papias – 1. The presbyters, the disciples of the apostles, say that this is the gradation and arrangement of those who are saved, and that they advance through steps of this nature; and that, moreover, they ascend through the Spirit to the Son, and through the Son to the Father; and that in due time the Son will yield up His work to the Father, even as it is said by the apostle, "For He must reign till He hath put all enemies under His feet. The last enemy that 3

shall be destroyed is death."(8) For in the times of the kingdom the just man who is on the earth shall forget to die. "But when He saith all things are put under Him, it is manifest that He is excepted which did put all things under Him. And when all things shall be subdued unto Him, then shall the Son also Himself be subject unto Him that put all things under Him, that God may be all in all."(9) vii. Ireneaus 1. disciple of Polycarp 2. 120-202 AD 3. quotes Psalm 110 to show a distinction between the Father and the Son 4. Since, therefore, he treats of the first origin of things, he rightly proceeds in his teaching from the beginning, that is, from God and the Word. And he expresses himself thus: "In the beginning was the Word, and the Word was with God, and the Word was God; the same was in the beginning with God."(6) Having first of all distinguished these three--God, the Beginning, and the Word--he again unites them, that he may exhibit the production of each of them, that is, of the Son and of the Word, and may at the same time show their union with one another, and with the Father. For "the beginning" is in the Father, and of the Father, while "the Word" is in the beginning, and of the beginning. Very properly, then, did he say, "In the beginning was the Word," for He was in the Son; "and the Word was with God," for He was the beginning; 4

"and the Word was God," of course, for that which is begotten of God is God. viii. Justin Martyr 1. 110-165 AD 2. having learned that He is the Son of the true God Himself, and holding Him in the second place, and the prophetic Spirit in the third. 3. quoted the OT to prove distinct persons – Genesis 19:24 4. I will mention to you other words also spoken by the blessed David, from which you will perceive that the Lord is called the Christ by the Holy Spirit of prophecy; and that the Lord, the Father of all, has brought Him again from the earth, setting Him at His own right hand, until He 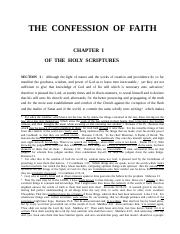 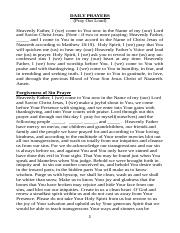 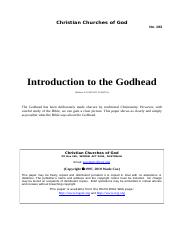 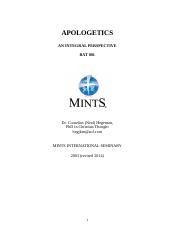 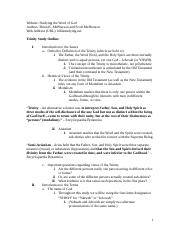 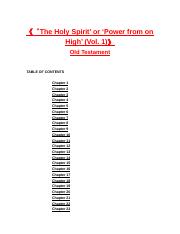