Argentina 2018 so its especially important that the

preserved foods, and aluminum.” (Argentina, 2018) So It’s especially important that the proper business etiquette is practiced and followed. Argentina consists of twenty-three provinces and one autonomous city, Buenos Aires. Provinces are known to be separated for administration purposes into different compartments and municipalities, excluding Buenos Aires Province, which is cleave into ‘partidos’ and ‘localidades’. Buenos Aires is also known to be the capital of Argentina. Spanish explorers claimed first dibs on Argentina’s soil, as time progress other people begin to migrate there for a fresh start at life; while this is the case the majority still speaks Spanish. Gauchos reside in Argentina as well; “gauchos” are or were known to be a stony, ambulant man who eschew modern city living to chase a more effortless existence in Argentina’s lounge Pampas. They are known to be experts in horse back riding, hunting and outdoorsman. (Stewart, 2017) Gauchos in Argentina jobs would relate to cowboys’ duties in the United States and that’s herding cattle. 1. Question 1 requires you to discuss the general elements of culture (described in Chapter 2 of your textbook) as they apply to your chosen nation. What are the major elements and dimensions of culture in this region? (See Chapter 2 of the textbook for a list of the required dimensions.) Some of the general elements of culture in Argentina would include how in America the word ‘creole’ means “a person of mixed European and black descent, especially in the Caribbean”. (Argentina, 2019) In Argentina, ‘creole’ means that in “Argentina it generally connotes a person of mixed origins”(Argentina, 2019) Argentina is also known as the country of the “River Plate Culture”, the River Plate Culture is based off of the idea or concept of ‘embracing’, as it allude to the culture of Uruguayans and Argentines occupying the River Plate Basin region. During the late fifteenth and early sixteenth century, Queen Isabel of Castille and Ferdinand of Aragon emphasized the Spanish and Catholic heritage, that was deeply enriched; Latin Americans identified themselves as ‘Argentines’ or as ‘Ches.’ Ches is known to be an abrupt remark commonly used in Argentina, Uruguay, Rio Grande do Sul, and the Valencian Community; a comparable American remark would be considered “hey,you.” This is the purpose for Argentine- born commander of the Cuban Revolution, was called “el Che.” (Argentina,2019)

4 GLOBAL BUSINESS CULTURAL ANALYSIS: ARGENTINA The orientation or identification of Argentina is very interesting to me in the fact that its’ name was derived from a poem, “Argentina y Conquista del Desierto” by “Martin del Barco Centenera”. (Argentina, 2019) The country ‘Argentina’ originates from the Latin term for silver, initially the Spanish were under the impression that they would run into the hosting place of ‘metal’ within the land. The national culture of Argentina is known to be a ground for debates due to a spectrum of nationalist and populist sectors eyeing only the ‘gaucho tradition’ as the ultimately element of Argentine culture. (Argentina, 2019) History along with present times 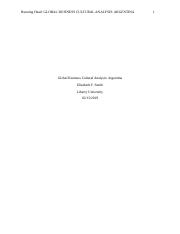 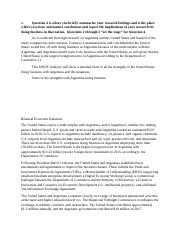 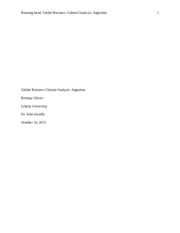 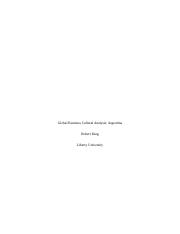 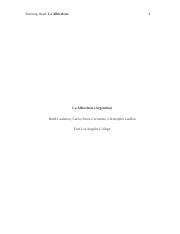 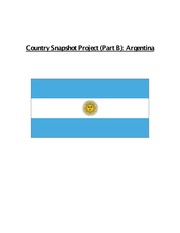 Group project on the Ethical and cultural differences in Argentina