Nicholas a student who boards in their house proposes

men. Nicholas, a student who boards in their house, proposes a tryst with Alison. Absalom, a parish clerk, also tries to court her. Nicholas contrives a plan to deceive the carpenter. He convinces the carpenter of an impending flood and instructs John to provide tubs and provisions for them. At night, when they retire to their tubs in the attic to await the deluge, the carpenter falls asleep and Nicholas steals away with Alison to her bedroom. Meanwhile, Absalom woos Alison outside her room. In the darkness, he asks for a kiss. She sticks her backside out the window. He kisses her backside. Realizing that he has been duped, Absalom obtains a red-hot iron. Absalom returns and asks for another kiss. Nicholas, amazed at Absalom’s foolishness and wishing to participate in the jest, sticks his backside out the window while Alison says it is she, and Absalom brands Nicholas with the iron. Nicholas’s screams of pain awaken the carpenter, who falls to the ground and breaks his arm. Nicholas and Alison convince the neighbors that the carpenter is delusional about the flood.

Next, the Reeve, the Cook, and the Man of Law tell their stories. In “The Reeve’s Tale,” a reaction to “The Miller’s Tale,” Oswald the Reeve tells about a dishonest miller who robs two clerks. They retaliate against him by getting him drunk and taking advantage of his wife and daughter. “The Cook’s Tale,” a fragment of about fifty lines, tells of a young man done out of his inheritance by a wicked older brother. In “The Man of Law’s Tale,” Constance, daughter of a Roman emperor, marries first a sultan of Syria who is killed and then a king. Both mothers-in- law cause her to be accused of treachery, but ultimately she is reunited with her second husband. The wife of Bath next offers her tale. She prefaces the story with a discourse on marriage, based on her experiences with five husbands. In “The Wife of Bath’s Tale,” a knight in King Arthur’s court rapes a young woman. When he is sentenced to death, the queen intercedes and agrees to save the knight’s life if he searches for a year to ascertain what women most desire. As he is about to return after an unsuccessful search, he encounters an ugly old woman. She agrees to tell him the answer if he will grant her next request. The knight agrees, is told what women want, and returns to court. When the knight reveals to the queen that women desire power, his answer is accepted. The old woman appears and demands that the knight marry her. The knight is reluctant but changes his mind after the old woman lectures him on the true character of nobility. After the marriage, the old woman is transformed, becoming young and beautiful. The Friar, the Summoner, the Clerk, the Merchant, the Squire, the Franklin, the Physician, the Pardoner, the Shipman, the Prioress, the Monk, and even the narrator himself all tell their tales as the pilgrims continue toward Canterbury. “The Friar’s Tale,” directed by the Friar at the 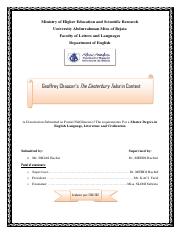 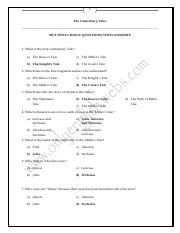 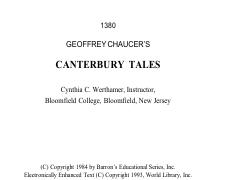 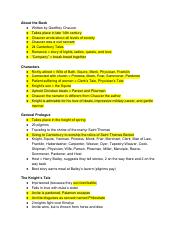 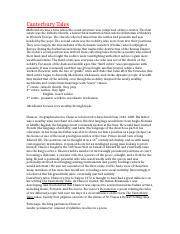 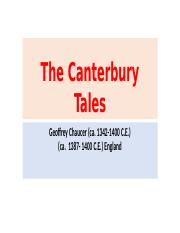