California’s Hazardous Waste Control Law (HWCL) has even stricter hazardous waste designations than the federal government, requiring that materials pass an additional toxicity test. California is the only U.S. state with a toxics policy similar to the E.U. (see below). For example, California prohibits the manufacture, distribution, and processing of brominated diphenylethers (PBDEs) and also requires that substitutes for brominated flame retardants (BFRs) not be persistent, bioaccumulative, or toxic. B. Regulation in the European Union and Other Countries In February 2003, the E.U. established the WEEE (Waste Electrical and Electronic Equipment) and RoHS (Restriction of Hazardous Substances) directives. Both policies seek to minimize the amount of electronic waste headed for landfills and incineration. WEEE sets minimum recycling targets with which member states must comply. No explicit ruling has been made on whether WEEE applies to PV systems, but Article 13 of WEEE mentions the possible incorporation of solar PV products. 98 In anticipation of the inclusion of PV systems in WEEE, the European Photovoltaic Industry Association and German Business Association have launched the “PV Cycle” program to develop “a European-wide collection, recycling, and recovery system.” 99 This effort by industry (although only voluntary) is an excellent first step in minimizing the end-of-life impacts of PV systems, but should not preclude the specific inclusion of solar PV systems in the WEEE. Beginning in July 2006, the RoHS required that electronics sold on the E.U. market contain only minimal amounts of lead, mercury, cadmium, chromium, polybrominated biphenyls (PBBs), or brominated diphenylethers (PBDEs). The maximum threshold is 1,000 parts per million (0.1 percent) of each of the above, with the exception of cadmium which is more restrictive, at 10 parts per million (0.01 percent). U.S. policies are less restrictive, although PBBs have now been banned in the U.S. Manufacturers in the U.S. must comply with RoHS for products sold in the E.U., but not for products sold domestically. In Japan, the leading PV manufacturing country for most of the past decade, laws require the collection of electrical appliances (such as refrigerators and washing machines) for recycling, but computers and other electronics products are not specifically included. 100 A fee is assessed on electrical appliance retailers, with retailers required to take back products and transport them to collection sites. C. The Toxic Waste Burden on U.S. State and Local Governments The solar PV industry has the potential to provide enormous environmental benefits, but the toxic materials contained in solar panels will present a serious danger to public health and the environment if they are not disposed of properly when they reach the end of their useful lives.

Toward a Just and Sustainable Solar Energy Industry 26 - Silicon Valley Toxics Coalition Of the 73 bills related to the solar PV industry that were introduced in the California Legislature during 2007 and 2008, none addressed the manufacturing or end-of-life hazards discussed in this report. Most of the bills focused on installation 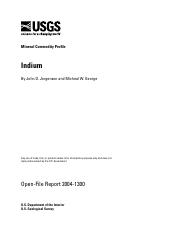 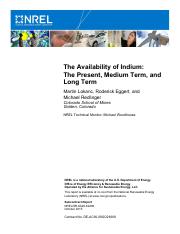 The Availability of Indium - The Present, Medium Term, and Long Term.pdf 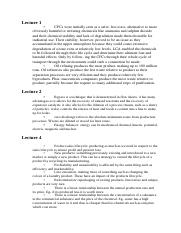 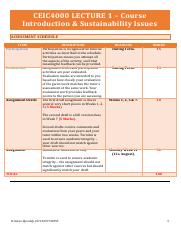 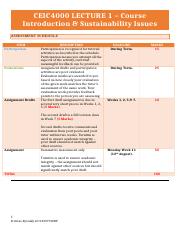 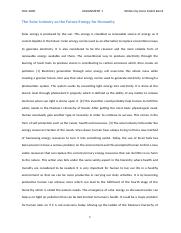 Give a brief explanation of the function of your selected industry within society.docx