Krim, J. (2005, October 18). Recruitment tool targeted: Privacy-minded coalition seeks to quash Pentagon database. The Washington Post , p. D5. Moor, J. (2001). The future of computer ethics: You ain't seen nothin' yet! Ethics and Information Technology, 3 , 89-91. Musgrove, M. (2005, October 22). 'Phishing' keeps luring victims. The Washington Post , p. D1. Oldenburg, D. (2005, October 23). Consummate consumer: Find the fax fiends. The Washington Post , p. F1. Sterling, B. (2004). Robots and the rest of us. Wired Magazine. Retrieved October 11, 2005, from The Washington Post . (2005, October 21). Former CEO agrees to spyware penalties. Technology Briefing, p. D5. Weckert, J. (2001). Computer ethics: Future directions. Ethics and Information Technology, 3 , 93-96. Weiser, M. (1995). The technologist's responsibilities and social change. Computer-Mediated Communication Magazine, 2 , 4, 17. Return to top of page These are the mouseovers for this section. Mouseover 1: Malicious software, typically loaded without the user's explicit permission, that is intent on causing damage or disruption. Viruses, worms, and Trojan horses are all types of malware. Mouseover 2: Technologies for measuring and analyzing physical and behavioral human characteristics. A typical applications is identification validation, using fingerprints, retina or iris scans, or facial recognition. Mouseover 3: An environment where computing resources are embedded rather than acting as distinct objects—also referred to as pervasive computing. The goal is for users to focus on the work they need to perform rather than on the technology, as well as to have the environment sense requirements and automatically respond as needed. Mouseover 4: This term was developed in the late 1990s to describe the social and economic gap created by the difference in access to information between those individuals who have computer and Internet access and those who do not. This term also refers to the various literacy and skill levels that exist in regards to using digital information. Mouseover 5: Science and technology of using machines (robots) to perform tasks without human intervention using artificial intelligence. Mouseover 6: Also called AI. Intelligence exhibited by an inanimate object, typically a computer. The AI Report broken links or any other problems on this page. Copyright © by University of Maryland University College. Page 6 of 11 Print a Module 1/17/2011

machine can emulate human behavior. Mouseover 7: Physical and/or emotional stress related to computer usage. This can also be caused by information overload, constant connectivity to the office, and increased productivity expected in the information age. Mouseover 8: Software that attaches itself to a computer file (usually an executable file) and is then launched when the file is opened or run. The software spreads through the computer, causing various degrees of harm depending on the virus' severity. 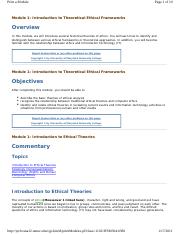 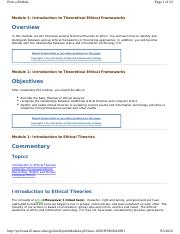 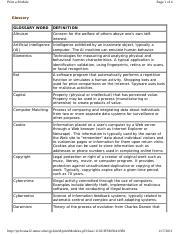 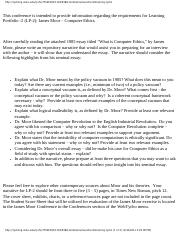 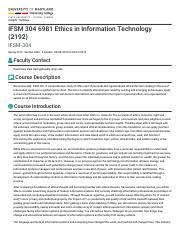 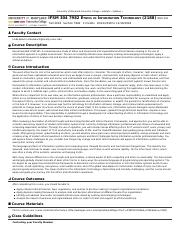