Substantial medical progress has been made com pared

• Substantial medical progress has been made com- pared to SARS which could result in a vaccine. If China’s measures prove successful Looking ahead, a key signpost will be the development of fresh infections numbers. Currently, they are still rising ex- ponentially. If China succeeds in limiting the spread effec- tively to the province of Hubei by its quarantine measures, then the acceleration speed could start mitigating and eventually flatten out. In such a scenario, China’s GDP will likely only be limitedly affected. Back in 2003, the SARS epidemic mostly affected the regions Beijing and Guang- dong which accounted for about 15% of GDP. Hubei ac- counts only for 4% of GDP. Assuming a proportional re- sponse, China’s GDP could be negatively affected by about 0.5 pp of GDP short term. Given some rebound, the negative impact could mitigate to about 0.25 pp over the longer term. Another, more drastic approach, draws on the fact that private consumption contributed 3.6 pp to the 2019 growth rate of 6.1%. Thus a drop in private consump- tion by 10 pp would result in a loss of GDP growth by 1.2 pp. In such a case, we would expect monetary and fiscal policy to step up its support, beyond the expansionary measures we currently have in our forecast (RRR cut by 75 bps, 30 bps cut in Loan Prime Rate, FP to compensate for losses). However, if China’s measures prove ineffective, the likeli- hood of a global pandemic substantially increases. In such a case, the financial market impact would be much more severe and lasting. Limited spillovers to the US and euro area The speed of the spreading depends on variables like tour- ist flows, geographical distance to China, health expendi- tures and sanitary conditions, government response to the disease, climate conditions and population density. We think that taken all these criteria infections in Europe and the US are likely to remain contained with no major re- strictions on the population and firms being imposed. The dampening economic effects emanating from China on the US and the euro area will primarily be due to the fall of Chinese output and, as partially compensatory meas- ure, the decline in global oil prices. In 2018, 6.7% of the extra-euro area goods exports went to China (incl. HK). Assuming the numbers of the SARS case (2 pp fall in Chi- nese output in the short-term), the IMF’s global model as well as the ECB’s global model predicts output losses of 0.08% for the euro area and 0.1% for the US relative to baseline in the first year after the shock. In case the GDP impact in China was even more limited, the loss would hardly be felt. The SARS epidemic According to WHO data, the number of confirmed SARS cases was 5,328 and the death toll 349. China’s GDP growth was most affected in Q2 2003. It dropped from 11.1% yoy to 9.1% yoy. However, growth recovered to 10% in Q3 and Q4 2003. On an annual basis, growth in 2003 advanced to 10%, after 9.1% in 2002. However, it must be taken into account, that the international back- drop was rather favourable. Different papers see GDP by 1 pp resp 1-2 pp lower than it would have been if the SARS outbreak had not occurred.

Most Popular Documents for BUSI 2043 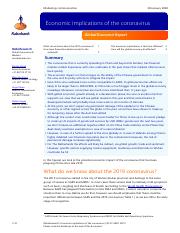 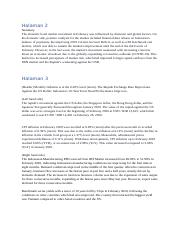 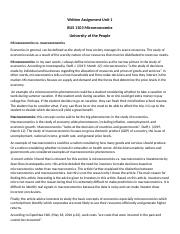 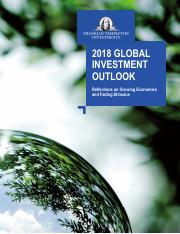 Wizard Co. currently has only a real estate division and uses only eq.docx 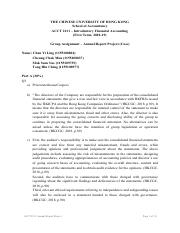